Most of the fun is over. We've watched the Hawks take Kirby Dach at the 2019 Entry Draft, Sign Lehner and Carpenter on July 1st and host some promising prospects at Developmental Camp.

Let's take a look at some key dates/events as the Blackhawks organization finishes up their offseason and pack their bags for Europe in October to kick off the regular season.

I will also offer the "best-case scenario" at each stop along the way.

While the Hawks haven't been there for that long, they did win the tournament in 2017 thanks to some stellar play from Alex DeBrincat.

There is a lot of excitement about this year's tournament after the hype of Chicago's 2019 developmental camp in July. The Hawks will be ripe with talent and should have a real shot at taking the title again. 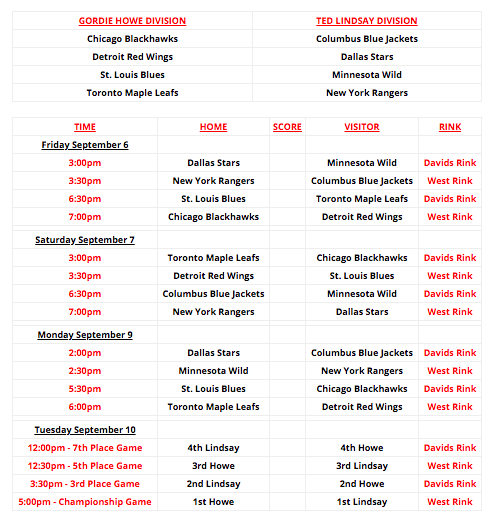 With Dach, the Hawks will have a decision to make after training camp or his first 9 games. If Dach performs well again in a Hawks sweater at this tournament it'll be another step towards making this team for the foreseeable future.

Jeremy Colliton will finally get his training camp. After being launched into the difficult position of attempting to replace a Hall of Fame Coach in Quenneville, while trying to tweak a professional hockey team's system in-season, one has to assume Colliton is anxiously awaiting time with his team.

There was limited time to truly practice last year so the Hawks were learning on the fly as to what Coach JC was looking for out of them.

Now, they have some time. Also, with the myriad of new additions to this Chicago team, Colliton and the rest of the coaching staff will have their work cut out for them. I'm excited to see how a Colliton run camp differs from the last decade of operation Quenneville.

Here is a breakdown of how the Blackhawks preseason schedule. 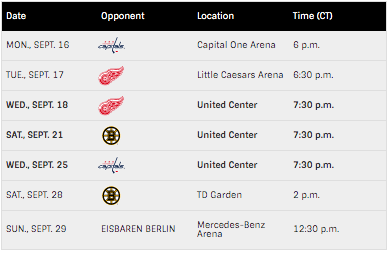 Best-Case Scenario: The Blackhawks have created some serious competition for training camp this year. This should be one of the best internal battles leading up to the regular season than we've seen in the last 3+ years.

The most ideal scenario is that the competition is so fierce throughout training camp that the coaching staff has to make more difficult decisions than they expected.

I'm not going to sit here and say that Kirby Dach or Adam Boqvist making the team is the right decision – I'll leave that up to the coaches – but the fact that the Hawks have high-end talent entering the scene this training camp is an amazing and exciting aspect.

Also, there's hope that with this newfound depth and competition that this fuels the returning players with that hunger to start the season as a confident playoff-contending team.

The Blackhawks will play their last preseason game vs. EISBAREN BERLIN in Germany on September 29th. Then, they play the for reals on October 4th in Prague, Czech Republic vs. the Flyers.

There's a good chance that both David Kampf and Dominik Kubalik will be on the ice in their homeland for this October 4th regular-season opener.

The last time the Blackhawks started a season overseas was in the 2009-10 season when they began in Helsinki, Finland… and we all know how that year-end for Chicago. Hey, maybe it's good luck to kick it off overseas?

Best-Case Scenario: Well, the Hawks win these games and start off hot in Europe.

Honestly, though, I just hope they take the right mix of players that really gel together in a great experience to play overseas. It will be different than opening the season in North America, however, it could prove to be an amazing bonding trip for the 2019-20 Blackhawks. It shouldn’t been too difficult with guys like Andrew Shaw over there keeping things loose.

Those are the main dates you need to keep an eye on. Also, the Rockford IceHogs will be in training camp around the same time as Chicago and begin their season on October 4th.

I will have more IceHogs specific articles coming up as we near training camp.


All I have for now.

Signing off from the cottage,

Join the Discussion: » 185 Comments » Post New Comment
More from Tyler Cameron
» My thoughts… in the form of a podcast
» Toews earning that $10.5M contract
» The rollercoaster continues
» Up and down we go
» Hawks lose to Flames, lose Strome