Wanna blog? Start your own hockey blog with My HockeyBuzz. Register for free today!
Follow @VGK_Buzz
With just one free agent remaining, RFA Jimmy Schuldt, and limited cap space, the Vegas Golden Knights' roster seems to be fairly finalized. Up front, the team features 13 forwards, all returning from last season's club. Their biggest roster question comes on defense. With only six NHL players under contract, the team that carried eight d-men most of last season will need to one or two more to round out the roster. Who will fill the final defense slots, with one getting regular playing time.

There was a ton of defensive action this summer for the club. Colin Miller was sent to the Buffalo Sabres in exchange for a second and fifth round draft pick, in a cost-cutting move. Jake Bischoff, who served as the team's eighth defenseman for a large chunk of the season, got a new three-year, $2.15 million ($716,667 AAV) deal.

Deryk Engelland also signed a new contract as an Unrestricted Free Agent, coming back to Vegas for at least one more season at a modest $700,000 cap hit. His contract is loaded with performance bonuses which can more than double his pay, if all come to fruition. Interestingly enough, some of the conditions stipulate 42 games played.

Finally, as mentioned previously, Schuldt remains a free agent, but by all accounts, will be back in the mix by the time training camp rolls around. He's a former Hobey Baker Finalist (NCAA) and could pan out to be a pretty solid NHL defenseman.

With the return of Engelland, the top two pairs and half of the third pair seem set. George McPhee made it pretty clear via conference call a few weeks back, Engelland will play early and often. He's not here to be a teacher or an extra body, they like what he brings to the table and want him in the lineup despite subpar measurables suggesting otherwise.

Nick Holden still has one year left on his current contract, but has been utilized as a fill-in during his time with the club. With a spot in the lineup seemingly up for grabs, who will fill that last D slot for the Golden Knights?

Listed in (my) priority order 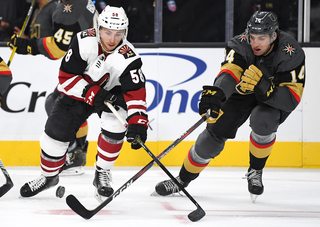 Hague is my number one choice to make the jump (USA Today Sports)
In my opinion, Hague is the most intriguing in-house option for the final spot in the lineup. Hague has been looked at as the #1B prospect on defense over the past two seasons. With the departure of Erik Brannstrom (#1A), hello Mark Stone, Hague became the de facto number one defenseman waiting in the wings.

Although Bischoff spent a lot of time practicing with the big club, Hague remains ahead of him in the pecking order. Bischoff getting the call was a move that afforded Hague the opportunity to keep playing in games, as opposed to sitting in the press box. This is a common practice with prospects. The better the prospect, the less likely a team wants him sitting in the press box, versus getting games in at the AHL level.

Last season, Hague, with his booming slapper, potted 13 goals with 19 assists in his first full season in the AHL. During the 2017-18 season, his last in the OHL, Hague scored 35 goals with 43 assists in 67 games. Even in the O, a defenseman averaging more than a point per game speaks volumes to his potential. He won the Max Kaminsky Trophy as the OHL's Most Outstanding Defenseman that season. This kid could be pretty damn good.

"Hague is a rangy, two-way defenseman with imposing size.."
-HockeyProspect.com

Hague is a big boy, with a long reach (search #LongSticNic, it's a thing) that helps him stifle opposing forwards headed into his end. He's not shy and will throw his size around when needed. For a 6-foot-6 defenseman, he skates very well, which we got to see on display at Development Camp back in June. He was easily the best defenseman on the ice. His wife range makes him the perfect fit next to another two-way defenseman in Jon Merrill. Both men can play in both ends of the ice, appropriately complementing one another.

Both Hague and Merrill are left-handed shots, but it wouldn't be out of the question to pair the two. Both have the ability to play the off-side and Hague has the option to use his large frame to impede the opposition. Especially with today's equipment for defensemen, especially the new squared-off stick blades, guys can play the opposite side much easier than in the past. Hague is my personal top choice for the 6D slot.

Schuldt quite possibly has the highest upside of all the options for a spot somewhere within the top three defense pairs. My biggest bug-a-boo with Schuldt is that he may be better suited with a guy like Schmidt as a partner, rather than playing third pair with Merrill. Head Coach Gerard Gallant has done very little shuffling on the blue line and it seems the top-four would be a lock to stay the same. If the club would have elected to part ways with Engelland, I believe Schuldt and Schmidt would make a terrific second pair.

Schmidt has been pushed to the left side when he inherited the right-handed Engelland as a partner mid-way through the 2018-19 season. If Schuldt were to link up with "The Great 88", the lefty could play his strong side and have the freedom to play his patented two-way game. Same goes for Schmidt who seemed to get tentative without McNabb across the ice from him. 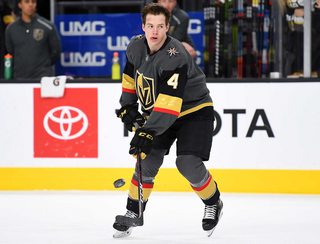 If all pairs remain the same, Schuldt could fit with Merrill, as the latter has experience playing with Miller, a bona fide offensive weapon, last season. Merrill may be the most versatile and ready to take on a new partner, as he has played with just about every defenseman on the roster. When he didn't have Miller, he had the defensive-minded Nick Holden. Schuldt could add his value to the offensive side of the game, if paired with Merrill.

He still needs a contract, but Schuldt comes in with a ton of hype and success at the collegiate level. We got a quick look at him in the regular season finale last year and he played well. Jimmy Schuldt may very well be the guy to take this job.

In a world that is dominated by analytics, Plus/Minus ratings still matter. It's not the end all, be all stat it used to be, but it still shows who was on the ice for goals for and against. Zach Whitecloud led the entire AHL in Plus/Minus rating for the 2018-19 season with a +39 rating. This mark is impressive for a defenseman who is not known for his offensive game (6 goals, 22 assists). He has never hit double digit goal totals, but he is reliable in his own end and more-than-competent in all three zones.

Whitecloud is one of those guys who just does everything well and never looks out of place. He doesn't do much that visually pops, but maybe that's what you need out of a third-pair defenseman, similar to Merrill. Neither man is a game breaker offensively, but both can contribute. Whitecloud is also a righty, which bodes well for the opening at hand, provided the top-four defensemen remain in the same roles.

At the end of the day, Whitecloud is a safe option and the Golden Knights could do much worse than the six-foot-two, right-shot defenseman.

Now that he has signed a new contract, Jake Bischoff is a legitimate option once again. He has the ability to play in the NHL, especially on the third pair where most teams are using aging, flat-footed veterans. 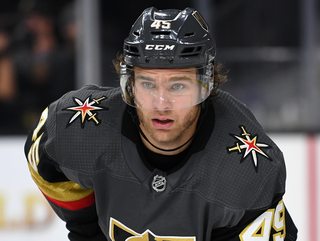 Jake Bischoff has experience with the team (USA Today Sports)

Bischoff has been a fixture on the Chicago Wolves' penalty kill, when he's not with the big club, which is something the Golden Knights could benefit from. Along with Hague and Whitecloud, Bischoff provides a younger, more mobile option for a team that pairs McNabb and Engelland on their top PK unit.

"Bischoff can carry any partner defensively, being stout positionally, but would be better given a puck-moving partner, as he's not exceptional in transition."
-Shepard Price, Knights on Ice

If he earns the spot in camp/preseason, the 25-year-old lefty could be a nice, steady, low-risk player to round out the defense corps with.

Although Holden has the most NHL experience of the group, the others have one or zero games, he is the least intriguing option of the bunch. Furthermore, he has been on the outside looking in since signing in Vegas and General Manager George McPhee has said, "This looks like the year we put a rookie on the blue line". McPhee also added, when asked about the Miller trade, that the young guys "could be more than a third-pair defenseman".

At this point in his career, Holden is exactly that: a third-pair defenseman. He has little to no offensive upside, which is fine, but when paired with Merrill puts the Golden Knights behind the eight ball. Gallant likes to deploy a puck-mover with a stay-at-home type and Holden puts a defensive-minded player with a decent two-way option in Merrill. 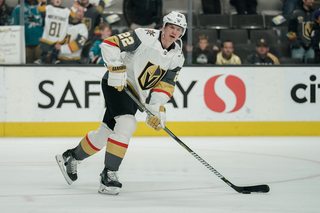 Holden is more-than-adequate for the seventh defenseman role or could even be sent down to Chicago (AHL) to bury half of his cap hit. Regardless of what happens, Holden does not seem to be the option for that final spot on the defense.

Coghlan is a 21-year-old right-shot defenseman coming off three solid seasons, two in the WHL and a 2018-19 campaign with the Chicago Wolves. Coghlan provides a right-handed option who has impressive scoring touch from the blue line. Over those three seasons he recorded 17, 15, and 17 goals respectively and finished his first AHL season with 40 total points. He still may be a year or two from being in play, but he is certainly turning some heads with his scoring ability and upside. Keep a distant eye on this undrafted defenseman out of British Columbia, Canada.

Only time will tell who takes that spot, but training camp and the preseason will be a life-changing time for the aforementioned options. Gallant, McPhee, and Co have an important decision to make because the wrong one could possibly be the difference between a third-straight top-three Pacific Division finish or a dog fight for a Wildcard spot.

Fortunately, the team has one of the best goaltenders in the league in Marc-Andre Fleury. Fleury has shown the ability to carry the team on off nights, but those will need to be minimized the older the future Hall of Famer gets. For now, he is the perfect option to help ease the next member of the Golden Knights' defense corps into action.

Be sure to follow me on the Twitter for your Golden Knights updates, insight, and the occasional bad joke.