Wanna blog? Start your own hockey blog with My HockeyBuzz. Register for free today!
Here's the game, folks...you can bring back one player from the Panthers past to add to the current roster for this exciting upcoming season.

What Side of the Game?

No surprises here, I went right to the blueline. It was actually kind of tough deciding on a former Cats defenseman. A few guys came to mind almost immediately, but I had to do a little research to make sure I didn't miss any of Florida's key blueliners over the years.

It was fun to look back and see just how many talented guys the Panthes have had on the blueline over the years. I wanted to try and keep the list short and concise. It's a little bias, too, as it has guys I like in particular for one reason or another - I left a couple more guys off out of fear of your guys ridicule, HA!

I knew what I was looking for in style of play and it allowed me to narrow the list a bit more. Campbell, Bouwmeester and Svehla were all impressive talents in terms of skating and offense. There's a number of guys on the current roster that are of this mold - some close to the former talent, others not so much.

Jovanovski, Laus and Gudbranson seemed to bring a game closer to what I lean towards and what this team needs on the backend - physicality, toughness and simplicity (at the right times).

However, there could be only one...

Who Gets the Nod?

It really came down to Jovi and Laus. I was a fan of them both, but at the end of the day, Laus won out for me.

Not only did he rock #3 (my favorite), but he was a solid defender who brought it every night for nine years, until and injury ended his career.

A rugged blueliner that showed no fear of the opposition's toughest players. Through his style of play and enforcer mindset, he gained his teammates respect and an easy fan favorite.

In nine years with the Panthers, five of which he came close to playing every game, he averaged around 11 points a season. His true contribution was that he was a solid, dependable defender who showed up every night and lowered the boom physically. He was consistent through the Panthers successful years as well as their rough ones.

This type of gritty, defensive-minded, tough character that plays a simple, hard/heavy game on the blue line would be just what the doctor ordered for the 2019-20 campaign.

What former player would you guys like to to see back in a Panthers sweater? 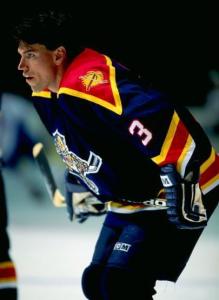 [Image from The Hockey Writers]

The Cats have agreed to terms with Denis Malgin on a one-year, one-way contract. The forward has appeared in148 games with Florida and has notched 48 points (24 goals, 24 assists).

Hot Off the Presses

The Panthers announced today the 25-man rookie camp roster. From their site:

Head over here for more detailed information pertaining to the full list of players expected at camp.