Wanna blog? Start your own hockey blog with My HockeyBuzz. Register for free today!
The Penguins picked up a point against the New York Rangers after no-showing the first period. The remaining two periods the Penguins were the better team out attempting the Rangers 38-22. Questionable choices by Brian Dumoulin and Evgeni Malkin cost the team in overtime and picking up the extra standings points. The real news today isn’t the game from last night. It is an update on Sidney Crosby.

Crosby aggravated the sports hernia Saturday night at PPG Paints Arena, but sources say the Penguins captain has been dealing with the injury since training camp. He opted against surgery when the Penguins lost multiple forwards, including Evgeni Malkin, to various injuries early in October.

Crosby is now weighing the opinions of medical personnel whether he should undergo surgery, which would typically require a 4-6 week recovery, the sources said.


I think this is an easy choice. Have the surgery. This team is going to need Sidney Crosby at his best. Without Phil Kessel more pressure is on Crosby and Malkin to lift up other players to produce offense. Crosby can’t do that if he’s well under 100% of his capabilities. Phil Kessel isn’t close to being a complete player like Crosby and Malkin, but he is a player who has a huge track record of scoring goals and playmaking unlike any of the other options the Penguins currently have. Not to mention the power play woes that currently exist. Kessel was a nice safety valve in case the team lost out on Crosby or Malkin's offensive production. Alex Galchenyuk has yet to make a positive difference in this regard.

Here’s the upcoming schedule via ESPN 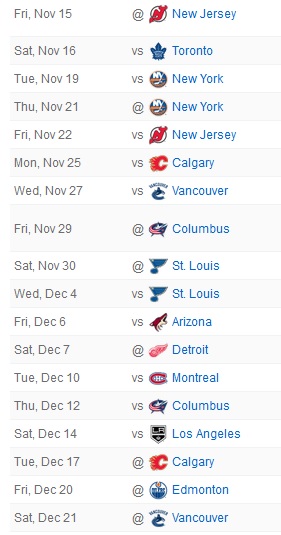 It’s navigable. There are some teams in the top half of xGF% at the present moment such as: Vancouver, Columbus, Montreal, Los Angeles, Calgary, and at 16th overall Edmonton. The west coast swing isn’t as easy as it has been in recent years, but that isn’t until the end of December and if Crosby has the surgery now he might be back for the road trip.

We’ll see what Crosby and the medical staff decide on doing. I think having the procedure is the best for both player and team.