Wanna blog? Start your own hockey blog with My HockeyBuzz. Register for free today!
Sidney Crosby did the right thing and got the surgery for his sports hernia. He will be out until after the holidays 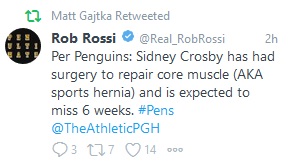 Crosby strategically played through this injury. This is something he’s been dealing with since training camp. After Evgeni Malkin went down halfway through the first game against the Sabres he knew the Penguins would be in rough shape without him in the lineup. What Crosby did with Malkin out of the lineup probably saved the season. It seems like hyperbole, but it would be a lie if you said you weren’t concerned about the Penguins without Malkin for weeks at a time. People were rightfully concerned about the team and if they would bank enough points during Malkin’s absence. Add Crosby to the injured reserved list? Yeah, that would have been an all-out panic. They definitely would not be where they are in the standings right now. He bought them some time. Now the team needs to return the favor.

Complicating this is Kris Letang’s injury. When Malkin was out the team still had their elite play driving defender. Right now Letang is week to week and you can’t replace what he does. This is a lot to put on Evgeni Malkin’s plate. It is tough to lose players the caliber of Crosby and Letang. It’s an obvious statement. It still needs to be said. Something working for the Penguins is that this year’s team is pretty good at driving play. Even with Crosby or Letang off the ice they are still a team that goes above the 50% mark. In year’s past it would have been in the mid-forties. Now some of the success of the non-Crosby/Letang players is driven from Crosby/Letang eating up minutes against the other team’s best players. They will lose that safety net.

Matt Murray and Tristan Jarry are going to have to be above average. Being average probably isn’t going to cut it. I worry about the ability to score goals especially with the power play not showing any positive signs at the moment. This means you need to prevent them. Goaltending has been average to this point with a .920 5v5 save percentage. They are .910 in all situations.

With Sidney Crosby missing six weeks he will not be on the Penguins trip to Western Canada. I know this is something that is probably not lost on him. He knows what he means in Canada and he only visits those cities once a year. It is a bummer for both the fans and player. This is the reality of injuries and how the NHL schedule is set up. I think Crosby only visited Western Canada twice in his first eight years in the league due to the schedule and his concussion issues. It is also one less Crosby and McDavid matchup while both players are still playing at a high level. So this is disappointing.