Wanna blog? Start your own hockey blog with My HockeyBuzz. Register for free today!
The game started with a Sidney Crosby slap shot goal of all things 27 seconds in. A great start against one of the better teams in the NHL. That was the high water mark for the Penguins on Thursday. The Bruins were the better team and got the result they deserved a 4-1 victory.

Old friend of the Penguins Jaro Halak stopped 29 of 30 shots to really squeeze the Penguins chances of coming back. It wasn’t Halak’s most difficult night. Pittsburgh really didn’t challenge in the high danger areas 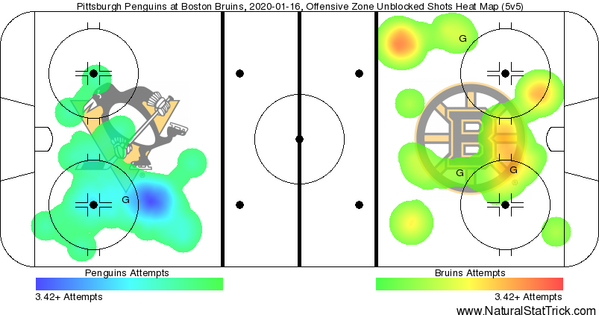 The Penguins have been doing great this year. They are one of the best defensive teams in the league. They have Sidney Crosby healthy. There are a lot of positives. Last night was just a case of things not coming together against one of the other teams who are as good or better as the Penguins. All the trends point towards the Penguins still doing a good job of generating high danger chances. 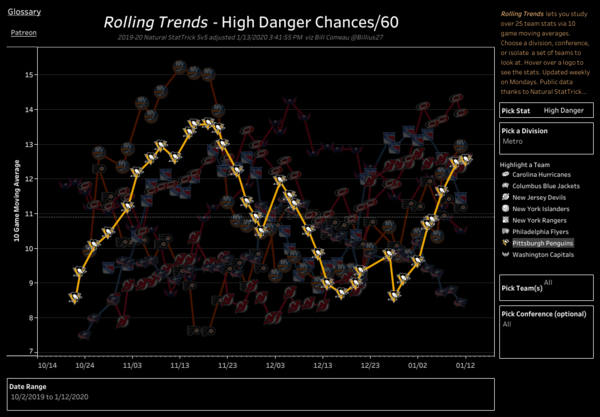 Now one issue the team may start to have is finishing the chances. Losing Jake Guentzel is huge. He is one of the best finishers in the league. He has a 15.64 shooting percentage the last three years and his sample is large enough to be confident he’s pretty good at the goal scoring thing whether he’s with Sidney Crosby or not. Jared McCann and Bryan Rust have been great on the goal scoring front this year, but they are regression candidates. McCann is shooting 14.7% when he has been a 9.7% shooter in his career. Bryan Rust is a 12.1% shooter in his career, which is very good, but he’s at 18.6% this year. Like any player these guys might hit regression at some point. Dominik Simon does some things very well. He can set up plays and make good transition plays. He also isn’t very good at shooting (7.1% career) and is on the top line at the moment. Domink Kahun is at 13.9% and we don’t really have a big enough sample to know what his true ability is. Perhaps Rust and McCann keep chugging along doing great, but I think it is definitely within the realm of possibility they fall of a tad. Combine that with Guentzel missing and you could see the team go cold on goal scoring front for a little bit even with Crosby back.

This is why the Penguins should be looking for a little bit of help in this area. I don’t doubt they are trying The Ilya Kovalchuk talk from earlier in the year was predicated on his shooting and ability to help in this way. I don’t fault the Penguins for not signing him, but he is doing well so far for Montreal and I think the Penguins should continue to search for someone who can help with finishing on the wing to continue to hang with the better teams.

The Penguins will play the worst team in hockey tonight before they get another shot at the Bruins on Sunday.