Wanna blog? Start your own hockey blog with My HockeyBuzz. Register for free today!
With the improvements to the Penguins forward depth there are going to be NHL players on the roster who gets scratched when everybody is healthy. Mike Sullivan is going to have to make some tough choices especially if Bjugstad ever returns.

I was looking over some of Brandon Tanev’s numbers and something jumped out to me that he was widely praised for, deservingly, earlier in the year which was drawing penalties. He was excellent at the beginning of the year and earning power plays for your team is a very good thing. This has dropped off a cliff. It hasn’t happened quite as often. In the last 29 games he has only drawn one penalty. He has taken three.

Now expecting him to keep the pace from the beginning of the year isn’t reasonable, but some people described it as a skill and he just hasn’t been able to replicate the success for a large portion of the season, almost half. This isn’t damning, but it is an observation about a change I’ve noticed.

Tanev is never going to be a great offensive option. He is having his second worst offensive season of his career. This was widely known as not being a strength before the year started. He does have 25 points in 61 games and on the surface it is OK. He is in second on the team in secondary assists which tend to be random and three of his 11 goals are the empty net variety.

He is however having a very good defensive year, his best in the league. 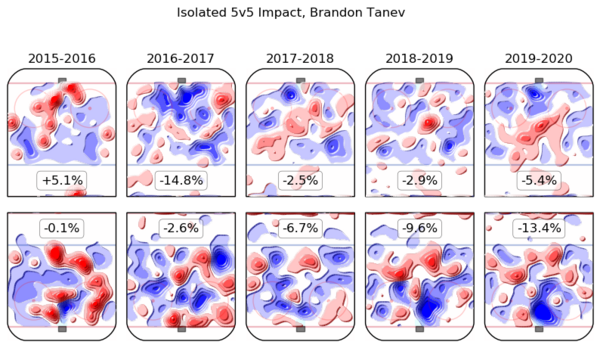 I said it in the summer and I’ll say it again. This isn’t a Jack Johnson situation. Tanev is an NHL player and he does some things well (defense). The Penguins are paying a premium for it though. Right now Tanev is planted on the fourth line and it is the appropriate place for him. The salary cap doesn’t matter right now, but moving forward his 3.5M is going to need to be re-evaluated each year.