Wanna blog? Start your own hockey blog with My HockeyBuzz. Register for free today!
We have answer on where Kasperi Kapanen will open the season

Where does Coach Sullivan think @kasperikapanen1 will start the season in the lineup?

Find out the answer to that question and more on the latest episode of The Scoop podcast: https://t.co/SjQ0NP4XOD pic.twitter.com/VC9yZ0rPIQ

The plan is to put Kapanen on the right side with Sidney Crosby and Jake Guentzel. I’m pretty sure this is where mostly all of the mock lineups have him placed, but this is the first time we have heard it from the person responsible for creating the lineup. It makes sense given the other options on the lineup. Bryan Rust showed great chemistry with Evgeni Malkin so no need to disrupt that. Evan Rodrigues isn’t going to play on the Crosby line. Brandon Tanev isn’t suited for the role so it leaves Kapanen.

Given the cost of acquisition you had to know the Penguins had big plans for their former first round draft pick. What we do know is there will be no excuses for Kapanen if he does not perform. He is going to get a healthy serving of the Penguins best center, winger, and defenseman. If he can’t produce with that caliber of quality of teammate then I don’t know who he will.

An encouraging sign is he didn’t exactly play with the big guns in Toronto. His most common forward linemates were Alex Kerfoot, Jason Spezza, and Pierre Engvall. His most common defender was… Cody Ceci where had a CF% of 47.42 with Ceci and a 54.44 without Ceci. I’m going to go out on a limb and say the results will be better with Kris Letang.

With better linemates the Penguins *should* get better results from Kapanen. They will need better than what Kapanen put up last year in Toronto given their right wing depth heading into the season 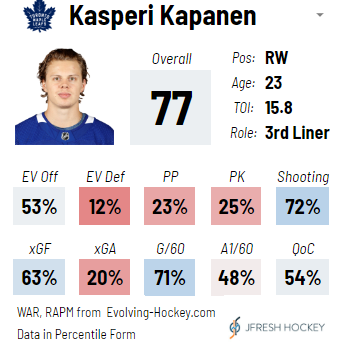