Wanna blog? Start your own hockey blog with My HockeyBuzz. Register for free today!
The Penguins 2019-20 season did not have a good ending. They were the first team to ever lose to a 24 seed in NHL history. Circumstances were definitely unique, but for a team with Cup aspirations that just isn’t good enough.

Using a new data visual that compares players first halves to second halves of the season I saw a distinct trend in the wrong direction last year. The Penguins as a whole were a good defensive team the first half of the year. The second half of the year everything came apart for the majority of the team. Here is an example of what the tool looks like using Sidney Crosby 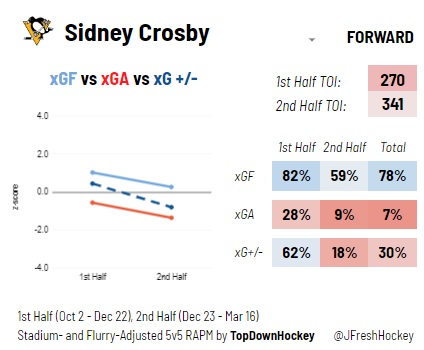 Sid was hurt and missed a ton of time. Seeing his numbers drop from the first half to the second half make sense in this context given he had surgery. He was never healthy at the beginning and he never quite regained his form. This is obviously problematic for a top heavy Penguins team.

The thing is Sid wasn’t the only one who fell off a cliff. The defensive performance of the majority of players took a nose dive. Not everybody was hurt and had surgery. This is how things changed for each of the regular players on the Penguins last year defensively. The percentage signifies what percentile they were in among their peers.

It is pretty stark to see a complete drop off by most of the players. The only exception were the defensive specialists on the fourth line who remained excellent. The only problem is that line provides literally no offense.

The first half of the year you had a lot of the more offensively gifted players also playing an acceptable level of defense. Evgeni Malkin and Bryan Rust were really good defensively. Then it all went away. Why? I’m not really too sure. Perhaps it was the shuffling of the roster by Jim Rutherford threw off the chemistry. Perhaps the coaches made some tactical changes. Whatever the reason(s) too many players Went from good to bad or from bad to worse in this area. 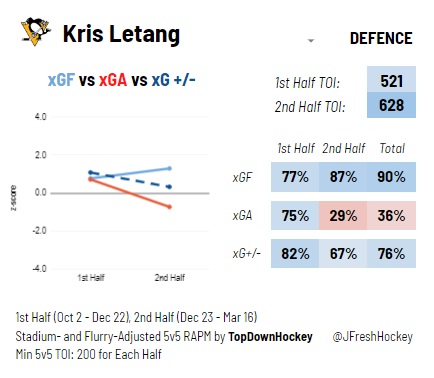 Marcus Pettersson bucked the trend but he was the only one. Letang cratered, but the absence of Brian Dumoulin certainly had a hand in that. Marino went from elite to decent. The Johnson-Schultz pair had a comical fall. Going from 83% to 1% is so Jack Johnson and he even got force fed the Penguins best defenseman.

Seeing this nearly team wide drop off in defensive performance is troubling. It certainly hurt their ability to compete and win. That said, I don’t think the answer is to lean on defensive specialists to get better. They have their own set of problems, not contributing any offense. The fourth line of ZAR-Blueger-Tanev were great defensively, but their offensive numbers were so miniscule it doesn’t move the needle at all. As bad as the defense dropped the fourth line had xGF percentiles like this:

We have evidence of the other players playing good enough on defense in half one. They don't have to be great. Middle of the road is good enough. What the coaching staff needs to do is figure out what happened from the first half to the second half. If they don’t identify what happened they are putting a lot of pressure on the two scoring lines to overcome a lot of issues. I don’t have faith it will work out if those improvements aren’t made just like it didn’t work back when Shero was fired.