Wanna blog? Start your own hockey blog with My HockeyBuzz. Register for free today!
On the backs of Pittsburgh’s 1-0 win over the Sabres and the Capitals overtime win the Penguins are the East Division champions. The Penguins did a great job navigating a number of injuries to key players, horrible early season goaltending, and a GM quitting like an angry toddler. They will now have a claim to home ice advantage for the opening round and if things go well the second round, too.

The Capitals have locked up the second seed which means it is down to the New York Islanders or the Boston Bruins for Pittsburgh's round one opponent. Boston is way less than ideal. Are they the favorite to be the opponent? Thankfully, no.

WSH wins in OT, so first two slots in the East are locked in: Penguins are first, Caps are second.#Isles would need to beat Boston on Monday and have WSH beat Bruins on Tuesday to finish third and play WSH. Nothing assured, but looking very much like #Isles-Penguins in round 1. 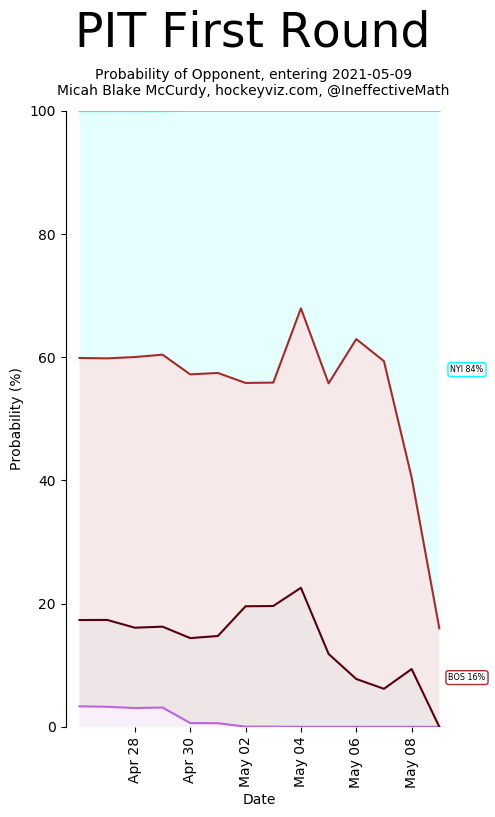 The Islanders are certainly capable of winning a series against Pittsburgh, but it would be ridiculous to suggest they wouldn’t be a more favorable matchup than the Bruins for Pittsburgh.

Now that the season is over I made some predictions back in January. Some were good, some were bad, some were meh.

I picked the Penguins to make the playoffs and they did. They won the division I thought they would be second or third. 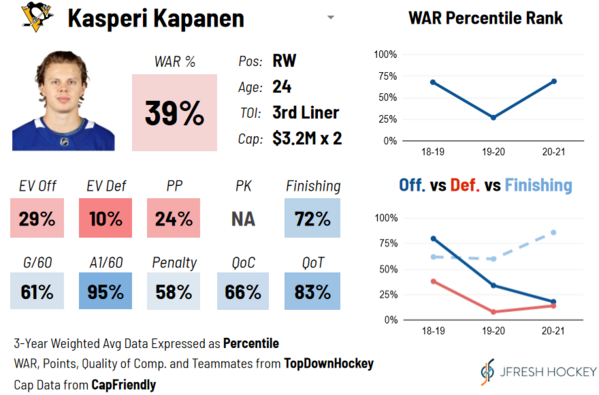 You can see in the bottom right chart the finishing overcame the drop in the ability to create offense and defend.

I said Jake Guentzel would score 30 goals. This was my most absurd pick and I knew it at the time. Only four players currently have 30 goals and they are Auston Matthews, Connor McDavid, Mikko Rantanen, and Leon Draisaitl. Scoring 30 goals this year is akin to a 45 goal season in 82 games. Guentzel did have a great year. He finished with 23 goals which would be about 33 in a full year. The prediction was bold and fell short even with Guentzel staying true to his career 16.2 shooting percentage. He was at 16.3 this year.

I said Marcus Pettersson would be traded. He is still on the team.

I said Sidney Crosby will return to being a candidate for the Hart Trophy. We still have to wait to see how things shake out with the voting, but I think he did. His offensive contributions remain elite. His defense, which cratered last year, returned to being elite. 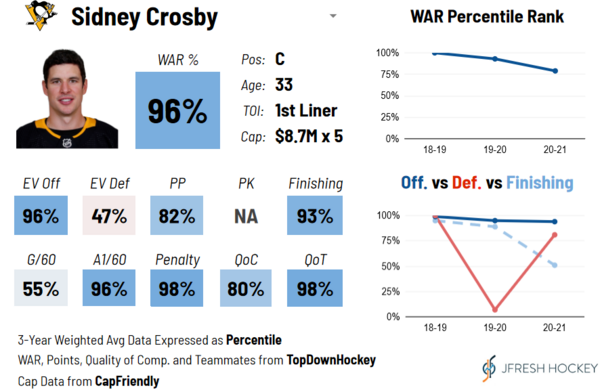 Connor McDavid is the only correct answer for the Hart Trophy. Sidney Crosby is certainly a deserving finalist.

I said Bryan Rust would get bit by the regression bug because of his career high shooting percentage of 17.9. This was technically true, but Rust did a great job at following up last year’s tremendous results with another wonderful season. He was on pace for 40 goals in a full season last year. He scored 22 goals this year which is a 32 goal pace in 82 games. So yes, technically he regressed. No, it certainly wasn’t a problem. Rust was still great.

I said the Penguins would have a top five power play. Didn’t look good for a while there! Guess what? As I am typing these words the Penguins are... fifth overall in the NHL with a PP% of 23.7. The Stars have two more game to play and are at 23.4 and the Avalanche have three more games to play at 23.1. Things could possibly change and bump Pittsburgh out. Overall, I’d say the Penguins even sniffing the top five after how they started the year is really impressive.

I said Tristan Jarry would... I didn’t have a specific prediction. I claimed because I was picking the Penguins for the playoffs then by default Jarry would be league average or better. He was, but it was a wild ride at times.

All that’s left now is for the Penguins to see how things shake out with the remaining games. Whoever the opponent is they will be traveling to Pittsburgh to start the series.