Wanna blog? Start your own hockey blog with My HockeyBuzz. Register for free today!
Kris Letang recently completed the15th(!) season of his impressive NHL career. Historically speaking it wasn’t his best campaign, but in the context of his age and his injury history (which includes a stroke) this was a tremendous season. He played 55 out of a possible 56 game season and when you compare him with some of the other top producers of points in the league from the back end he is right up there. 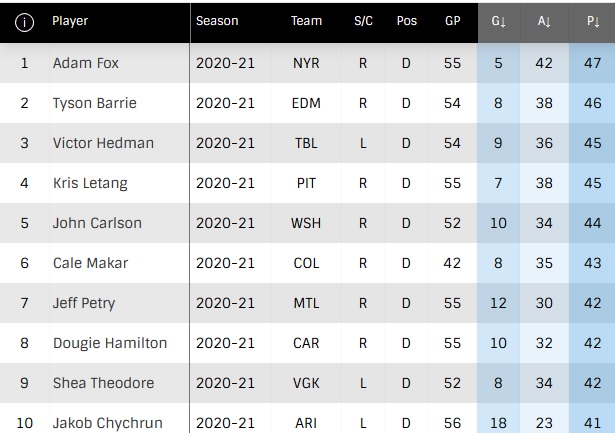 Depending on who you go to for analysis Adam Fox is one of the, if not the, leading candidates for the Norris Trophy. For Letang to have two more goals and two fewer points at age 33 is damn impressive. I’m not here to say Letang should be a Norris candidate because I think some of his underlying numbers have slipped considerably compared to his previous high standard. I am here to say Kris Letang remains a player who is underappreciated by both the local and national media. His career has been consistently overlooked as one of the best of the cap era and it absolutely should not have been.

Really, it is no fault of Letang because so many of his best seasons were cut down by injuries and a stroke(!).

Much like Sidney Crosby Letang was robbed of his prime. The 24-26 year old range, which is a player’s prime, only saw Letang play in 123 out of the possible 212 regular season games. His numbers in the games he did play are amazing as you would expect considering his age at the time. Even his 29 year old season, the one where he missed the playoffs and the Penguins won the Cup, was great. Pittsburgh probably would have gone down as one of the greatest teams ever if they had Letang in 2017 playoff run AND kept their PDO, which ultimately drove them to success without Letang.

The 2013-14 season was the year he had to shut things down because of a stroke. This story line has always been glossed over. It fact it has almost been completely forgotten. I mean he came back the very next season and played great hockey. Yet, couldn’t win the Masterton Trophy because Devan Dubnyk apparently recovered from… playing in Edmonton? He had a stroke and came back with six SOLID top pairing seasons! Amazing, just amazing.

I also find it laughable Hockey Canada never gave him the respect he deserved. Canada of course has way more room to make mistakes than any other hockey playing nation. They don’t have to get their player personnel choices right to still do well. It doesn’t mean Letang should have been shut out from representing them throughout the years. Here is a comparison of Letang and all the other “better” right-handed defensemen on Canada 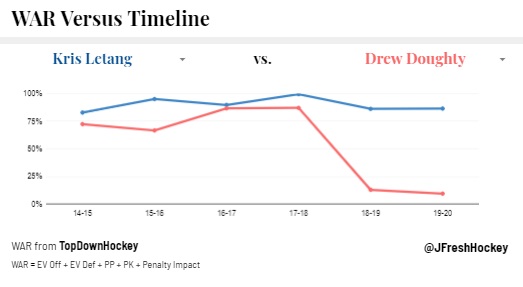 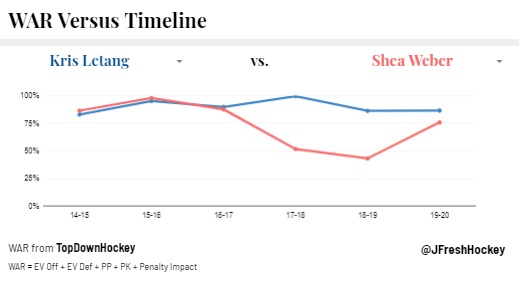 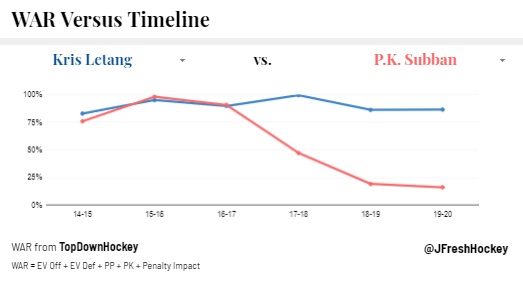 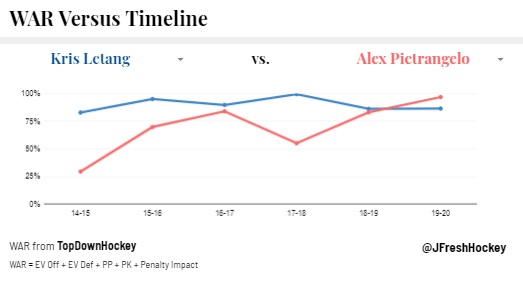 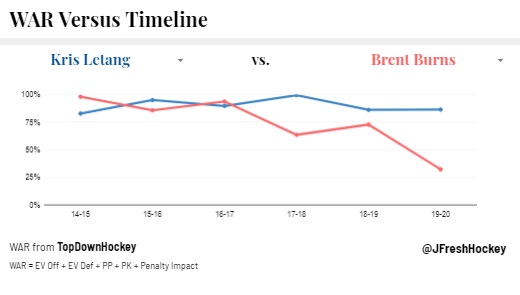 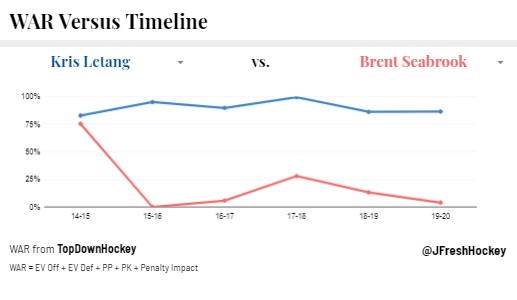 Drew Doughty won the Norris in 2015-16 for… reasons. You can see how Letang fared compared to him that year. You can see how Letang has fared to Canada's "golden child" right-handed defensemen for the past number of years. Doughty is "only" 31. What is his excuse for falling off a cliff? Brent Burns won the Norris in 2017. Letang compares very favorably there as well. He compares favorably to all the recent Canada defensemen and Norris winners! 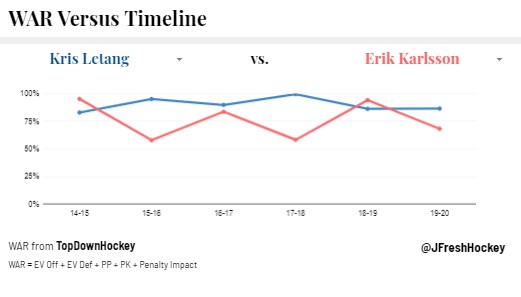 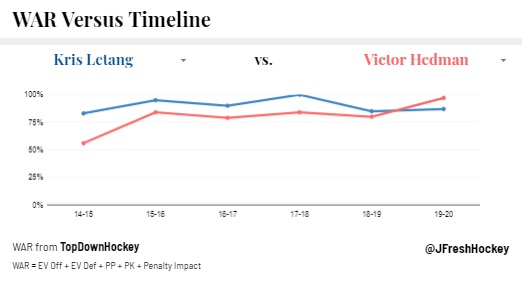 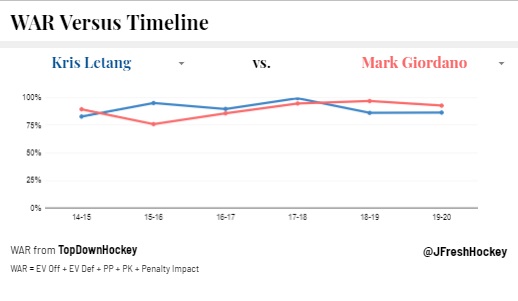 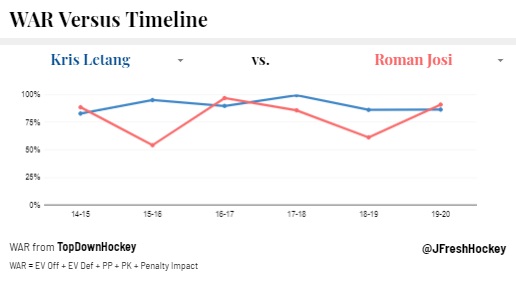 Would you look at that? More favorable comparisons to the league’s winner as best defensemen year after year. I am not suggesting Letang should have “stolen” any of these awards from the players who won. But I will say it is a hell of an accomplishment and a testament to Letang’s consistency that he is right there with all the winners year after year (again, after suffering a stroke). I’ll also add that if Drew Doughty was “deserving” of a career Norris then Letang oughta have one, too. His closest Norris was in the 2012-13 season where he finished in third. The 13 missed games no doubt had an impact. Despite playing in seven fewer games than PK Subban, who won the award, he had the same number of points with 38. No doubt a Montreal bias crept into the voting as well.

Put a bust in the Hall of Fame. There are already players in there for less… I’m looking at you Kevin Lowe.

At the very least put his number in the rafters. He’s the best Penguins defenseman of all-time and it isn’t close.


For the first time all year the Penguins had full participation at practice today. Casey DeSmith rejoined thus making the statement true. This is really good news with one really big caveat.

Here is the Pens' workflow at the scrimmage...

Evgeni Malkin did practice in full, but did not take part in the scrimmage. Why? Because Mike Sullivan said so

Injury updates from Coach Sullivan: "Mike Matheson and Evan Rodrigues participated in a full capacity. Tans did as well. Casey DeSmith and Geno participated in the practice part. They did not take part in the scrimmage, and that was a coach's decision."

It was a coach’s decision. What that means I do not know. Apparently that was the extent of the explanation per Taylor Haase of DK on Pittsburgh Sports.

I’m not in panic mode or worried about this… yet. Managing Malkin’s workload isn’t inherently a bad thing. In fact, it is pretty smart if you want to go with the assumption there were no injury setbacks. He is a 34 year old player with a lot of miles and wear and tear on the body over the years. The Penguins don’t even have a start date for the series yet. That said, this is certainly something to track in the following days. If we start to see consecutive days where he isn’t participating in all the team’s activities it is probably safe to say his collision with Dylan Cozens in the last game has had some lasting consequences. Up to that point I thought Malkin’s skating looked good and I was at ease with his progress. Now, who knows?