Wanna blog? Start your own hockey blog with My HockeyBuzz. Register for free today!
Just a quick one today. A few winners and losers from the trade made last night..

Winner: Matthew Tkachuk
The guy gets to earn 9.5 million in sunny Florida. What’s not to like? He’ll be right in the middle of the chaos when the Panthers play Tampa. If that organization could stop acquiring every cool Flames player (Tkachuk, Bennett, Lomberg) that would be great.

Winner: Brad Treliving (for now)
While losing two +100 point players off the roster is certainly hard to spin as “doing a good job”, Treliving managed to quell talks of his termination by bringing in a Hart candidate as well as a physical, Sutter-style defenceman. He now sits on a wealth of assets on defence and can add to the forward ranks by moving out surplus from a position of depth. We’ll dig into potential options in the coming days.

Winner: Andrew Mangiapane
The tenacious winger put up 35 goals and 20 assists last year. Very similar to Anthony Duclair’s 31 goals and 27 assists. The moving difference here being that Duclair was fed play after play of prime scoring chances from Jonathan Huberdeau. With Mangiapane only one season away from unrestricted free agency: it’s time to sign a one year deal and cash in. Happy for him.

Loser: MacKenzie Weegar
Weegar is going to find a place in Sutter’s system. The Flames were entirely lacking in physicality from the blueline last playoffs. Weegar’s 12.11 hits per 60 minutes of ice time last playoffs was only comparable to Nikita Zadorov’s 8.82. The rest of the pack were direly lacking in that category. 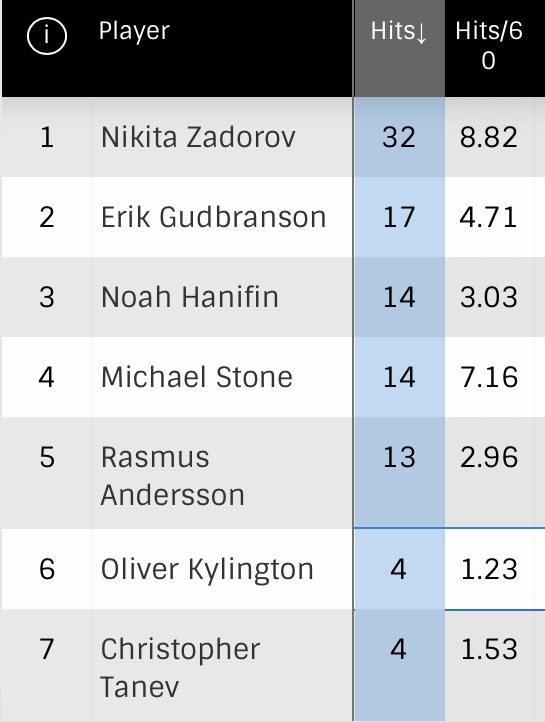 The problem for Weegar is that he now has some competition for powerplay on the right side. Even more so in that the Flames usually put out one defenceman with the extra man. Rasmus Andersson put up 50 points last year— 19 of them on the powerplay.

With Hanifin and Kylington already in a fierce battle for powerplay time on the second unit, where will Weegar fit in? Given that MacKenzie is an unrestricted free agent after this year— he might be unhappy with his point totals when all is said and done.


Winner: Jonathan Huberdeau
While the rangy winger may not be thrilled to be moving from Florida, he won’t be unhappy about his deployment. Sutter is going to put him out for every prime offensive opportunity he can. He gets a better center to work with in Elias Lindholm and there are several options for his opposite wing. And hey, maybe the guy will even enjoy living in Calgary.


Stats via naturalstattrick.com, moneypuck.com, and nhl.com. Graphic courtesy of nhl.com.