Wanna blog? Start your own hockey blog with My HockeyBuzz. Register for free today!
Yesterday, the Penguins did what can only be described as a good surprise. They bolstered their scoring depth on the cheap. It came with some familiarity. Danton Heinen will indeed be returning to the Penguins. Not only that, but he comes back making less money than he did before.

The Penguins have agreed to terms with forward Danton Heinen on a one-year contract.

The one-way deal will run through the 2022.23 campaign and carries an average annual value of $1 million. https://t.co/MBVi6ousgL

Heinen is coming off of a career high of 18 goals and fit in quite well with the team last year. I had chalked him up as a goner, not because I didn’t think he could help the team, but because he would sign with somebody else willing to pay more. There were rumors he wanted upwards of 3M per year. Clearly, the market did not dictate him getting 3M. I am borderline shocked he is actually coming away from a career high in goals and making 100k less than he was a year ago. The market can’t be great out there if this was the conclusion to Heinen’s offseason. 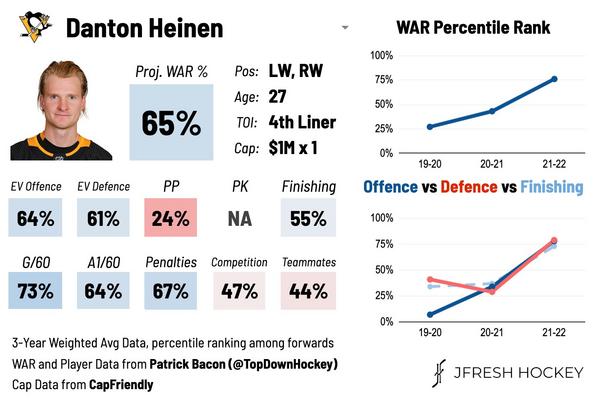 The important part about Heinen’s 18 goals were that 15 of them were at 5v5. He is never going to see significant power play time with the first unit. He can’t rely on his production coming from the power play and he doesn’t His 15 goals were the tied for the second-best mark on the team. Only Jake Guentzel (25), and Sidney Crosby (15) had as many as Heinen in 2021-22. To get this kind of 5v5 production at 1M is incredibly helpful.

I thought the Penguins were going to have to try and find their next Danton Heinen (low risk, medium reward) with a different player. I can’t imagine there are too many people upset with getting him back at the 1M price point.

This signing, while good, might not fix the overall depth issues the team has. It does push things in the right direction. I hope to see some more moves to shore up the forwards before we get to October.