That is, son of head coach Darryl Sutter, Brett Sutter.

While adding the 35 year old veteran may not be the biggest news of the offseason, the story is compelling. It has been no secret that Darryl Sutter has been handpicking a large portion of the players joining the Flames since being hired as head coach on March 4, 2021. Bringing in his son will be yet another of those additions.

Conversely, it was Darryl who traded Brett to the Carolina Hurricanes early in the season on November 17, 2010. The young grinding forward got into an incident in Scottsdale, Arizona. It seems like a bad decision or two was made. We all make them at some point in our lives. We’re not here to talk about what was clearly something that all parties would like to move on from. If you’re really interested, go look it up, but it’s nothing worth writing home about.

The result was that Brett took his trade out east a week later.

Since then, the pivot has proven that he belongs in the AHL. 81 goals, 99 assists for 180 points in 379 games. Points don’t really tell much. Brett has a very intangibly loaded game. He’s served as captain of the Ontario Reign for the last five seasons.

While his production has dropped in recent years, he certainly seems to be able to keep up at that level. 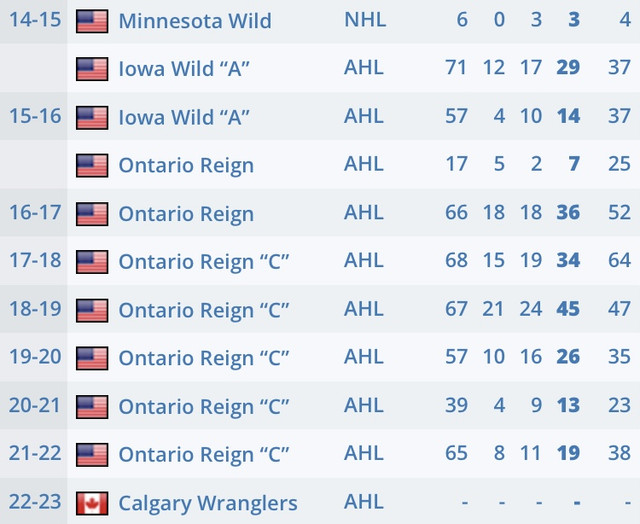 He still fights too. Two tussles last season according to hockeyfights.com – including one against Flames prospect Martin Pospisil. Here’s that fight.

With all of this said and out of the way – there is a fine line being ridden here. Being a coach’s son is rarely an endearing factor for teammates at higher levels. Every player trying to make it to the next echelon is hoping for more ice time and if one can find an external reason beyond their own play to blame their lack of opportunity on — it’s an easy thought process to go through when you’re feeling frustrated.

Logjam on the Wranglers

So, let’s look at the AHL lineup. First, there are a few guys leaving the organization. Glenn Gawdin signed a two year contract with the Ducks organization with the second year being a one-way. Good for him. Justin Kirkland is also headed to work for the Samueli’s in some capacity after signing a one year contract by Anaheim’s new GM Pat Verbeek. Great news for both of them.

Eetu Tuulola is going back to Finland to play for Ilves – the same organization Valimaki developed out of. Alex Gallant doesn’t have a contract yet, but might get on the roster as a black ace. It would be a shame to see him go after how much he has given for the team in terms of bouts and physical play. Luke Philp signed with the Blackhawks organization and will play in Rockford.


Likely not too many issues with the top six. The wingers from last season all remain. As does Connor Zary.

Here’s where things get interesting.

Ilya Nikolaev put up 72 points in 58 USHL games last season as a 20 year old. He moves up. His natural position is at center.

Rory Kerins had about as good of a season as one can in his final year in the OHL. 118 points in 68 games. Tons of multipoint games. 39 more points than the second highest scorer on the team, Tye Kartye(79).

Kerins is a center and likely won’t stay in the bottom six for long.

Ben Jones had 44 points in 68 games last year in the AHL. Including 25 goals. He even got a cup of coffee in the NHL amounting to two games with the Golden Knights last season. Natural center.

Training camp will sort out the lines, but it’s unavoidable that a player or two with a positive trajectory has to move to wing. Players in a top six role last season will be playing bottom six. Almost none of that bottom six will be content with their minutes and offensive opportunities.

Honestly, it’s rough seeing a guy like Jones, who fought his way into reach of a spot in the NHL – potentially looking down the barrel of playing out of his natural position while slotted near the bottom of a lineup the next year.

Maybe Jones steals a higher spot out of camp, but that just puts another player in the same position.

Brett Sutter is spoken of as a great teammate, a hard worker, and willing to sacrifice to help the team – but that doesn’t necessarily mean there won’t be some bitter resentment if the 35 year old veteran is standing in the way of a player’s trajectory at various points during the season. Time on ice can lead to bitter disputes when the potential to earn millions of dollars is on the line.

With that said, there’s a positive end to this situation as well. Brett will have much to impart on these younger pivots. Such a young bottom six will certainly need guidance as it navigates the 22/23 season.

Still, the double edged sword of this situation will be interesting to follow. Storylines are one of the most compelling aspects of professional sports – particularly ones involving redemption. The return of the coach’s son after over ten years of being exiled from his favourite organization growing up?

Yeah, that could be a fun story.