Wanna blog? Start your own hockey blog with My HockeyBuzz. Register for free today!
The Calgary Flames have officially confirmed that the price paid to the Montreal Canadiens for taking the final season of Sean Monahan’s seven year, 44.625 million dollar deal signed in the summer of 2016 would be a conditional 2025 first round draft. The conditions are — a lot. 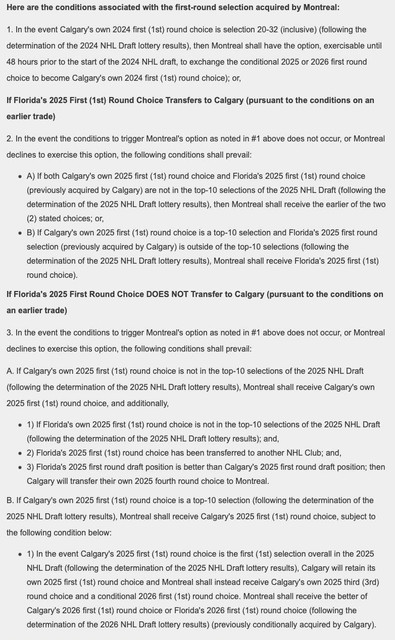 So, the Habs can take the Flames’ 2024 first rounder instead, but only if it’s between picks 20-32, but they can also take the best pick between Florida and Calgary’s picks in 2025, but only if neither are top ten. If either is a top ten pick then the Habs get the later pick — unless, again, they’re both top ten. If the Flames have dealt Florida’s pick and their choice is later than Florida’s — then the Habs get a 2025 Flames fourth and the Flames 2025 first, but also if Florida’s pick is traded already and the pick the Flames are giving up to the Habs is 1st overall, then the Habs instead get a 2025 third and 2026 first.

Nice and straight to the point.

Flames’ Perspective
It’s a hold-your-nose type of deal necessary to free up most of the seven million required to bring Nazem Kadri into the fold. The 31 year old Stanley Cup champion signed a 7x7 deal today which should make the Flames into a dangerous threat down the middle. Barring injuries, there should only be ten or so minutes a game involving a Flames center that isn’t Elias Lindholm, Nazem Kadri, or Mikael Backlund. Not bad.

Canadiens Perspective
Great deal. Expectations are low and if Sean Monahan’s second hip surgery gets him back on track? Yowza. They have not only an extra first round pick down the line; they also might have a decent asset they can sell at the deadline. Slam dunk trade for Habs general manager Kent Hughes.

After the smoke has settled, the Flames still have 2.136 in available cap space with only Adam Ruzicka left to re-sign.

They also sit on a bevy of NHL quality defencemen.

Could another move be in the works? Perhaps an updgrade for the third line?