Wanna blog? Start your own hockey blog with My HockeyBuzz. Register for free today!
When Pittsburgh visits the Anaheim Ducks this evening they will be down two forwards. Zach Aston-Reese has hit the IR and now Patric Hornqvist will join him out of the lineup. Patric Hornqvist has been diagnosed with another concussion. He missed time in early December for the same reason. Doubling up on concussions is obviously not ideal. According to Jason Mackey this is the fifth concussion for Hornqvist since December of 2014. Hornqvist has registered seven points in the last seven games prior to getting hit in the face with the puck against Florida.

Marcus Pettersson will play in Anaheim for the first time as a visitor. So far his tenure as a Penguin has been fine. I don’t believe we have seen his ceiling as a player because he has been attached at the hip to Jack Johnson. The reason this pairing is “working” is because Pettersson’s on-ice save percentage sine coming to Pittsburgh is 97.4%. Drop that to 91.5% and I’m not sure the Pettersson-Johnson pairing would be perceived as working. 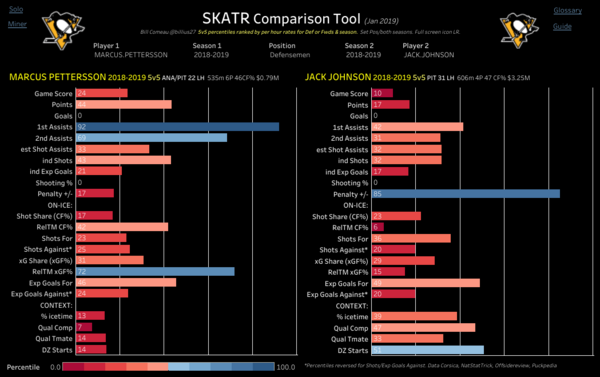 Pettersson has played 231 minutes with Johnson and has a CF% of 47.49. In his time away from Johnson (ANA included) it is 52.94 according to Natural Stat Trick. When Justin Schultz comes back from injury I would like the Penguins to get a little more creative with their defense pairings before the playoffs to see what they have in Pettersson. I don’t think you’ll ever know if he stays with Jack Johnson. The creativity of the defense pairings is neutered if the team is unwilling to sit Johnson. Here are some different pairings I would like to see and why

I want to see Pettersson in a bigger role to learn more about him. This wouldn’t be a huge jump to the top pairing playing the kinds of minutes that Letang does. It is a nice next step in the learning process.

Olli Maatta has shown over the course of time he is only as good as his partner. His numbers with Letang are strong. If Brian Dumoulin is actually as good as some think he should be able to slide into a pairing with Justin Schultz and not miss a beat. He is a complimentary piece to Letang. He doesn’t need to be a staple with Letang. IN the last three years at 5v5 Letang as a CF% of 54.33 with Dumoulin. Without him it is… 54.30. Let’s see if Dumoulin can raise the level of another pairing while Letang continues to do Letang things on his own.

This grouping has the classic top pairing we know works. It has a second pairing with the players who are commonly perceived to be the third and fourth best defenseman on the team. Pettersson is paired with what should be a better partner and remain in a limited role in which he should be able to contribute without the burden of top four pairing minutes.

Regardless of which direction the Penguins go I think they should figure out what they have by using some different combos. I am not interested in seeing Johnson in any of those combos. I doubt the team will leave him out, but that is to their own disadvantage. Even if they don’t play their best lineup things should definitely get better with Schultz. His absence has lowered the ceiling of the team due to the style they try to play. We will soon find out just how good this year’s version of the team can be when he comes back.