Wanna blog? Start your own hockey blog with My HockeyBuzz. Register for free today!
It’s going to be a while before we see tangible moves from the Penguins to try and correct the mistakes of the past two seasons. We still have a ton of playoff hockey left so the Penguins are stuck right now in a holding pattern. The holding pattern isn’t going to last forever so let’s get ahead of the curve and make some moves to right the ship.

It’s going to take bold moves for the Penguins to be contenders again. You look at teams around the league like the Vegas Golden Knights, Toronto Maple Leafs, St. Louis Blues, and Columbus Blue Jackets and you see teams who were/are bold and are still playing hockey. The Penguins have been dealing from the non-core parts of the roster and it has been just shifting seat positions on a Boeing 737 MAX. It’s time to get real before Sidney Crosby isn’t great anymore. Go big or go home

Let’s be honest he doesn’t want to play second fiddle anymore. He’s Russian and that is a big deal to Russians, so we’ve been told. He’s already been unappreciated while having a career any Canadian would kill for. It’s time for him to go home to… Miami. He already has a residence there and there are plenty of Russian friends already there or on the way (Sergei Bobrovsky, Artemi Panarin, Evgeni Dadonov, even Sasha Barkov sounds Russian). Better weather, younger teammates to do the hard work, and no media members to critique your play, sounds like a dream situation.

Pittsburgh fans were devastated and are still overcoming the tragedy of Brandon Saad never becoming a Penguin. Trade Malkin and bring in Pittsburgh’s own Vincent Trochek. He can slot right behind Sidney Crosby with his 50 points. We are talking about Evgeni Malkin so Trochek isn’t the only prize. With Olli Maatta likely being traded for cap relief somebody has to pick up the slack and that player will be Mike Matheson. Jim Rutherford loves himself depth defenseman and Matheson fits the description perfectly. He makes 4.875M until 2026 so it also falls in line with signing for too long and too much.

Throw in a first round pick and you have a deal.

This guy is too arrogant. The way he handled the media the other day is not fitting of what a classy Penguins player looks like. Yeah Kris, we would love it if you didn’t make mistakes. Your mistakes are so obvious and kill the team in the worst spots. If you would stop being greedy while trying to pad your Norris credentials maybe the team would do better. The team did great in 2017 without you and was great again this March, without you. The team needs more push back and I see a perfect scenario where the Penguins can get some push back while also getting a true #1 right-handed defenseman in return.

It's time to lean on that Jason Botterill connection and fleece him by trading away Kris Letang and Dominik Simon (just another Conor Sheary) in exchange for Rasmus Ristolainen, Scott Wilson, Alex Nylander, and the third round pick Conor Sheary was supposed to earn his former team. With Ristolainen you get push back and power play points. Think of the centennials version of Jack Johnson, but right-handed. He has first round pedigree and looks the part. Scott Wilson is a former top six Stanley Cup winning forward and the Penguins need draft picks to stock the cupboard for rental deals. You need Alex Nylander because…

He’s an incredibly frustrating player who goes through incredible scoring droughts. He isn’t a two-way player and has the appearance of lacking effort at times. He also doesn’t cooperate with the local media and this makes yet another core player who doesn’t fit the classy Penguin mold. This offseason is a great opportunity to cut bait and move on from one of the core players not named Sidney Crosby. Tampa Bay could use the one-time Conn Smythe snub, and two-time Stanley Cup Champion. The Penguins could use another player with a Pittsburgh connection. The trade is Phil Kessel for JT Miller. Not so fast, the Penguins will also take on Ryan Callahan while looking to get some of that push back for the forward group. The Islanders think they have the best fourth line in hockey? Not anymore. Hornqvist-Cullen-Callahan is going earn all 11.8M in compensation.

When you read what I have above it seems jarring. Trading Evgeni Malkin, Kris Letang, and Phil Kessel in one offseason seems absurd. However, you can’t argue with the results. It’s time to bring in the new era of Penguins hockey. 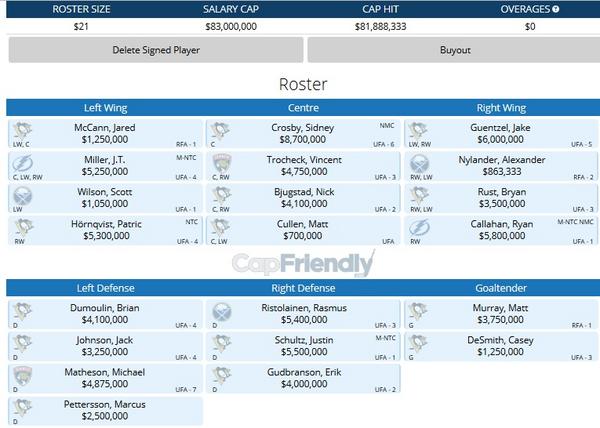 Plenty of push back depth, some more Pittsburgh born players, and the only true core member of the Penguins remains.