Wanna blog? Start your own hockey blog with My HockeyBuzz. Register for free today!
Happy Mother's Day to all the moms and great ladies out there!

How's everyone enjoying the playoffs? I loved seeing that Sharks win last night. I need one of San Jose or Carolina to get to the cup because I'm not sure I can watch a Blues vs. Bruins final... HA!

I haven't really been seeing any new or interesting things coming out of the Panthers camp lately. Honestly, since the Blue Jackets were knocked out, it seems the Bob/Panarin theory has really ramped back up - with fans noting these guys everyone move since their season came to an end.

The two biggest things (right now) that have fans believing they'll be signing with Florida?

1. Panarin posted some pictures of himself on social media hanging out on the beach in Florida

2. Bob put his luxury condo up for sale

I totally understand fans excitement, as I'm also pumped about the possibility of landing one or both guys, I'm just maintaining my stance of waiting until there's more solid/substantial info or an official announcement. While the speculation game can be fun, reading into every little thing guys do can be a dangerous game in terms of setting yourself up for a let down. That's just my personal belief, as I've been down that road a few times with rumors surrounding certain players supposedly going to certain teams solely based on hearsay and people's amateur detective work.

The Malkin rumor also seems to be staying around, with multiple sites and people weighing in on it.

In fact, there was an interesting hypothetical trade coming from Panthers news/opinion site, The Rat Trick with a couple of their writers putting together different articles with their trade thoughts last week. Below is a couple of those:

"To recap, that’s Evgeni Malkin, former Hart winner and veteran leader with a large contract and injury concerns, for, hypothetically, Vincent Trocheck (26-years-old in July), Henrik Borgstrom (or Vatrano or Tippett), Denis Malgin (22-years-old), and at least a 2nd round pick."

"If the package for Malkin was Trocheck, Tippett/Denisenko, their first-round pick, and a later pick/Malgin or equivalent, the Panthers would be insane not to take the deal."

Obviously, Malkin centering (in theory) that second line would be cool, but, man...there's a lot of things to be concerned about in my opinion.

Pittsburgh will obviously want a king's ransom for Malkin and the fear is the Cats would overpay for him. While big and skilled, Makin is going to be 33 and has a huge contract - where he's something like a 9.5 M cap hit until the 21-22 season. He's also dealt with his share of injuries.

But mostly, while every team can always benefit from strengthening down the middle, the Panthers have other needs to address first - defense and goaltending. Why "blow" a bunch of assets on bringing someone in who doesn't play one of the positions that's really needed right now?

At this point, I hope the Cats stay away. Losing a guy like Trocheck, who is a good, young player and spark for this team/fan favorite, I think could do damage - especially if some of the other young talent is moved along with him. This team has the youth and is right on the cusp of doing some really cool things, they just need someone to "unlock" that potential (enter Q) and fill some gaps on D and in net (free agency and sensible trades). That's the hope at least.

While it's a much different situation, the Malkin rumors sort of reminds me of the Lindros trade. While big 88 went on to find nice success in PHI, the pieces that went to Quebec (eventually becoming Colorado) helped them build a solid team, which eventually formed the '96 Cup-winning Avalanche - that swept the Panthers in four games...

Let's take a look at that trade real quick:

Serious haul and pretty wild when you think about it...

While the situations are very different - Lindros was young and possessed a rare combo of skill and strength and was billed as the next Gretz; while Malkin is a seasoned veteran with a few cups under his belt - the underlying idea is the same for me:

Be careful giving up too much to get one guy - especially an aging and oft-injured one.

Also...why help restock a team (PITT) that's been good for so long and shares space with you in the East?

I was looking through some old Panthers stats and came across Pavel Bure's best season, statistically, on the Cats. 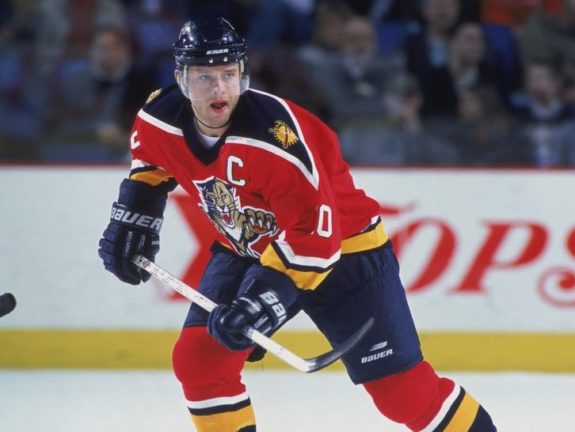