Wanna blog? Start your own hockey blog with My HockeyBuzz. Register for free today!
We have finally arrived at the expansion draft day for the Seattle Kraken. They’ve had a blank slate for a long time and we are starting to see early signs of team formation. Each of the 30 NHL teams (sans Vegas) will be losing a player today in some form or another. Some teams will straight up lose a player and nothing else. Others will cut a side deal with draft picks, and some teams will get a pending UFA taken which will count as their selection (hello Edmonton and Dallas).

What will the damage be for Pittsburgh?

Let’s put these players into some basic categories

It might seem weird to see me put a 4th line player here after saying all the Penguins had to do was sit back and let the Kraken take a 4th line player and they’d be good, but then the McCann trade happened and drastically changed the dynamic. The only explanation that comes remotely close to explaining moving McCann is they wanted cap space. I assume the Penguins will want the Kraken to take somebody with a higher cap hit so they can go shopping via free agency. Aston-Reese doesn’t save them meaningful cap space considering he is a pending fourth liner RFA coming off a ~1M cap hit. 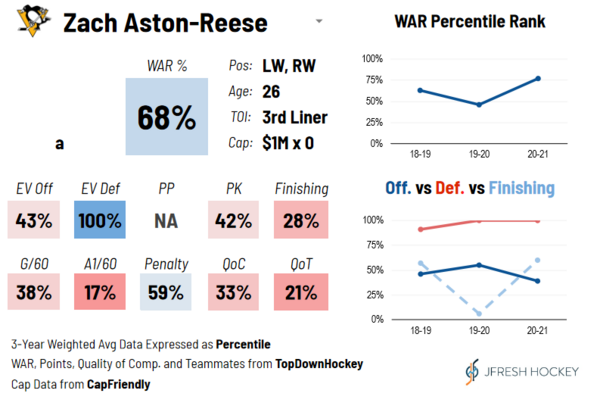 There are arguments to be made that Aston-Reese is actually the glue that holds the Penguins fourth line together.

Those are some interesting numbers and ones I wouldn’t flippantly cast aside.

If the Kraken do take Zach Aston-Reese the Penguins will have lost two quality depth players who make very little compared to their impact, for essentially nothing, and the Penguins don’t even gain meaningful cap space from it. When you combine the loss of McCann with the loss of Aston-Reese you lose decent value players for nothing. Not good.

I don’t see the Kraken taking Pettersson’s 4M cap hit because they signed Adam Larsson from the Oilers for 4M and there are rumors they have also signed Jamie Oleksiak from the Dallas Stars. They’ll have plenty of other defense options even if Pettersson is plenty capable as a player.

There’s no secret the Penguins are looking to make changes to their goaltending situation. I assume they would rather make the change with Jarry’s 3.5M which was a stretch when it was signed. It sounds like the Kraken have already signed Chris Dreidger to a contract and they will have quite a number of other goalie options inclucing Carey Price. I don’t think DeSmith is a likely candidate to be taken, but if he is the Penguins are left without a capable backup making minimal money with a pricier replacement on the horizon considering they don’t trust Jarry. The Penguins wouldn’t save cap space and would have to invest even more dollars into the goaltending position with their limited budget.

Technically, if the Kraken sign Ceci it would count as their selection from the Penguins. The Penguins aren’t likely to re-sign Ceci because he outplayed his contract and he should go to the market and get what he can, likely to be to rich for the Penguins current situation. While the Penguins wouldn’t be losing a rostered player and a player they’d be losing anyways this does not give them any cap relief which is why it goes in the middle case scenario. Again, the Kraken have already signed Larsson and Oleksiak so this one doesn’t seem as likely anyways.

There’s no getting around the fact that he is in his 30’s, makes 3.5M on a team that needs to cut salary, has a ton of term left, and he’s... a fourth line player. This would be a favor to the Penguins, the memes be damned. His entertaining style of play does not and will not ever come close to getting proper value at his cap hit. For a team that needs to revamp the roster and now replace a middle six forward (McCann) his 3.5M can be used, in theory, much better. Would the Penguins use this cap space wisely? Who knows, but they need the chance to try.

I’m not as down on him as an overall player as some, but the fact of the matter is we have a Mike Sullivan problem here. He is not flexible with his deployment of players and kept trying to force a square peg into a round hole playing Zucker with Malkin. Zucker makes 5.5M and the cap space relief would immediately give the Penguins more flexibility and options moving forward. They desperately need this space and if it could be created without the Penguins taking on any salary back it would be a good thing. Not sure what the market is for Zucker out there with a flat cap. I’m not sure what the market is for the Kraken taking him is either. There are no shortages of forwards available to them around the same price point and better value.

I didn’t mention much about trades because one of the few things we’ve had reported about Ron Hextall is his lack of motivation to use assets to sway the Kraken away from eligible players. We’ll see if this holds true.

Enjoy the draft. Might be the last one we ever get.

Join the Discussion: » 329 Comments » Post New Comment
More from Ryan Wilson
» Breaking down the Heinen seinen
» Thoughts on Ron Hextall's thoughts
» Penguins continue to go all McGinn on overpaying depth players
» Some unqualified RFA's to look at if Penguins aren't big game hunting
» The Penguins should go save Marc-Andre Fleury