Wanna blog? Start your own hockey blog with My HockeyBuzz. Register for free today!
It is game day. The Penguins and Canadiens faceoff in primetime this evening to kick off their five game series. We know goaltending can warp everything and can lack logic so we are going to put that to the side today (Matt Murray will start for Pittsburgh per Mike Sullivan). Instead, I want to focus on the things the Penguins can actually control to a certain degree to improve their chances of moving on to the round of 16.

Mike Sullivan can manipulate his line changes to get the matchups he wants for the most part. I think there are certain things he needs to do to help create situations for his best players to make the most impact. The best thing he can do is throw the fourth line to the wolves. I don’t want the fourth line to have 15 minutes at 5v5 matching the Canadiens top line every shift, but it would be a great thing to give that fourth line all the defensive zone starts against them to save up the Crosby and Malkin line to go nuts in better matchups. Pittsburgh hasn’t had a quality fourth line in a few years. They’ve neglected it for the most part and it hurt the team. At one point Matt Cullen was the reason they had a great fourth line, but they went to the Cullen well too many times. He was shot and ineffective during his second tenure. Other players like Carter Rowney, Derek Grant, and Riley Sheahan didn’t cut it. The trio of Aston-Reese-Blueger-Tanev have given the Penguins not only a functional fourth line, but one that has an actual strength, defending.

The Penguins fourth line had good defensive metrics this year.

As a trio they had an xGA/60 of 1.53 and a CA/60 of 46.34. When you throw in the fact they only had an offensive zone starting percentage of 26.52 it highlights their effectiveness. Mike Sullivan can use this to his advantage by using Zach Aston-Reese, Brandon Tanev, and Teddy Blueger against Brandon Gallagher, Tomas Tatar, and Philip Danault who are the Canadiens best trio per Dom Luszczyszyn 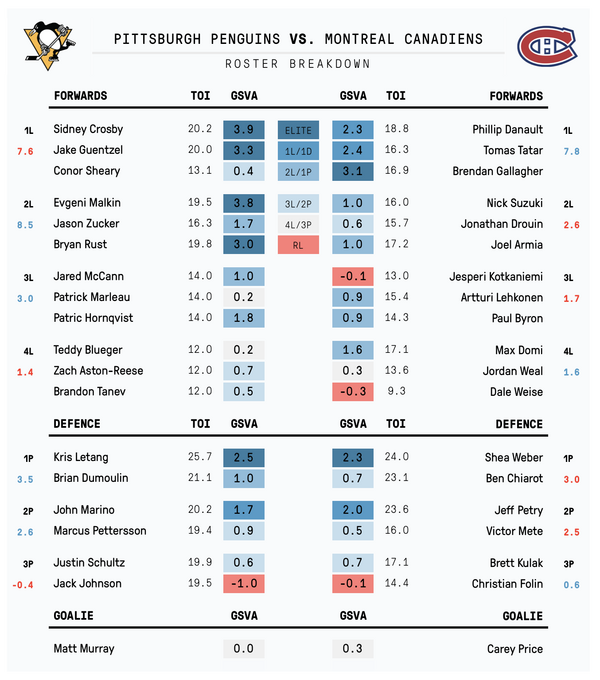 You can see the Canadiens top line is legit. You can also see things tail off after their best line. If the Penguins fourth line can tread water and not be destroyed the Sidney Crosby and Evgeni Malkin lines can run wild.

Malkin has some talent on his line on both wings for the first time in a long time (when everyone is healthy). Yes, Sidney Crosby and still going to have his full serving of Jake Guentzel and Kris Letang, but now Malkin can have Jason Zucker and Bryan Rust. I think Zucker can be a hybrid between Chris Kunitz and Carl Hagelin. I don’t think he’s as fast as Hagelin and I don’t think he has the same hands/tenacity combo as Kunitz, but I do think he has enough of each of those two players to be a nice fit for Malkin. Rust and Malkin are a known commodity this year so it should work out just fine. I think this line is the key for the Penguins. If this line goes off then the Penguins will be tough to stop assuming they get league average goaltending. The other thing that gives me confidence about the Malkin line is John Marino. Marino’s ascension up the depth chart will be a god send for Malkin. A year ago it was a steady diet of Jack Johnson sans Kris Letang and we know how that turned out. You can see there is only one player in the red on the Penguins and it is Jack Johnson at -1.0. According to the GSVA (Game Score Value Added) he is by far the worst player in this series. Hopefully he stays away from Malkin.

We know the top line with Crosby, Guentzel, Sheary has had success in the past. Sheary has good speed and can play the puck retrieval role. He is also good a baby chipping the puck past defenders to get Crosby and Guentzel zone entries with possession and speed which can lead to some incredibly dangerous chances. There are times when he flubs these attempts, but overall he will create more danger for his team than he will for the opposition.

I don’t know what to make of the Penguins third line. It’s a mish mash of talent and abilities. They don’t have to do anything special for the team to be successful. They just can’t be bad. I’m not predicting significant offensive contributions by them and if they are used with the bottom pairing tempering expectations would be justified. The Penguins are going as far as their top two lines take them anyways.

The Penguins are healthy and have a great look at moving on. There is nothing I see when looking at the two clubs why the Penguins wouldn’t be heavy favorites. Of course the Canadiens can win. It is a five game series in a sport of high variance. I don’t know why it would be expected though.