Wanna blog? Start your own hockey blog with My HockeyBuzz. Register for free today!
Two games in a row the Penguins have lost and it is two games in a row they gave up a ton of goals. It was seven to the Bruins on Sunday and eight to the Rangers last night. Tristan Jarry made his return from injury and lasted only a period. His night was over after a four goal Ranger first period. Casey DeSmith fared slightly better in that he averaged two goals less per period, but still an awful four goals against. One way to erase a ~65 CF% and ~60 xGF% is to have goaltenders combine for a save percentage of .680.

The Penguins are still in a good spot because of the March they had, but the injuries are starting to add up and there isn’t a team out there who can brush off as many as the Penguins have had. Last night, John Marino left the game and did not return so we might be adding yet another player to the list.

This is where the Flyers come into play. They should be sellers. The odds of them making the playoffs is incredibly low. Hockeyviz has the Flyers at 11% after last night. The Flyers don’t have a ton of pending UFA players, but they have some. One of which was linked to the Penguins in this week’s 31 Thoughts


Wanted something light at the top of 31 Thoughts today. Enjoy!https://t.co/sUR4DtIOnE

12. I could see Pittsburgh with interest in Scott Laughton. Remember: Philadelphia sent Mark Streit to Tampa in 2016, where he was flipped to the Penguins. (That’s awesome — the league needs teams who hate each other so much they refuse to make trades.) My sense on the Flyers is they’ve tested the market on Laughton. These things can change quickly, but the last time I checked, there hadn’t been much extension talk. I’m a huge Laughton fan, and the tough thing about Philly potentially losing him is that he loves being a Flyer.

This is just speculation, but it is coming from someone who is as piped in as anybody. I think Scott Laughton is a good depth player and would definitely give a boost to the Penguins depth. 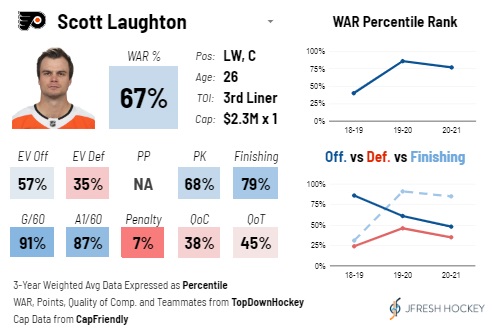 I like that his strength is more offensive than defensive. The Penguins should be looking for scoring depth. The other huge positive is that he can play center. This opens up a lot of possibilities with the lineup and allows McCann to move up the lineup as a winger if needed. It could also allow McCann to play third line wing with Laughton centering. Or you could flip Laughton to wing and put McCann at center. Point being you have a depth player with an offensive pulse who gives the coach options with the lineup. While I would prefer a player who is C/RW the most important variable is having the ability to play center. Also, he is considered a physical player and that will make Brian Burke happy. This is definitely something the Penguins should consider.

What is the issue? He is a rental. It is what it is. While the Penguins don’t want to be spending the few assets they have on rentals they also don’t exactly have a lot of great assets to acquire impact depth players with term, either. Even being a rental I believe he will be a sought after commodity which will drive the price up more.

Another issue? Are the Penguins and Flyers still going to act like they can’t trade directly with one another and try to convince a third party to get involved like the Mark Streit trade? Now that Ron Hextall is on the other side of rivalry and Chuck Fletcher (former Penguin assistant general manager) is with the Flyers perhaps they can just strike a deal directly.

If the Flyers correctly waive the white flag Laughton will definitely be an option on the market and the Penguins should at least consider, but they will be far from the only ones.

Join the Discussion: » 147 Comments » Post New Comment
More from Ryan Wilson
» Mailbag: Attend any game from Penguins past, trade values, and more
» Penguins show their pride in Buffalo
» Philly takes round 1 in the battle of Carters
» New lines with Jeff Carter
» Carter talks about next season while Sullivan talks about where he'll play