Wanna blog? Start your own hockey blog with My HockeyBuzz. Register for free today!
Does anyone really want to read about last night’s loss?

Would you have been surprised if it were announced that the Flames had actually cancelled the game and Sportsnet had simply aired a Flames/Senators game from last season?

In case Todd didn’t cover it last year: the Flames got caught on broken plays. Turnovers off transition plays in proximity to their own blue line that led to breakaways, minor breaks and goals against were the reason Ottawa plays so well against the Flames.

After a couple Senators goals it’s low risk plays, trap the middle and keep the puck to the outside.

What is also annoying is that the media and fans are now suddenly turning on the depth players.

This tweet from Kent Wilson is a great example: 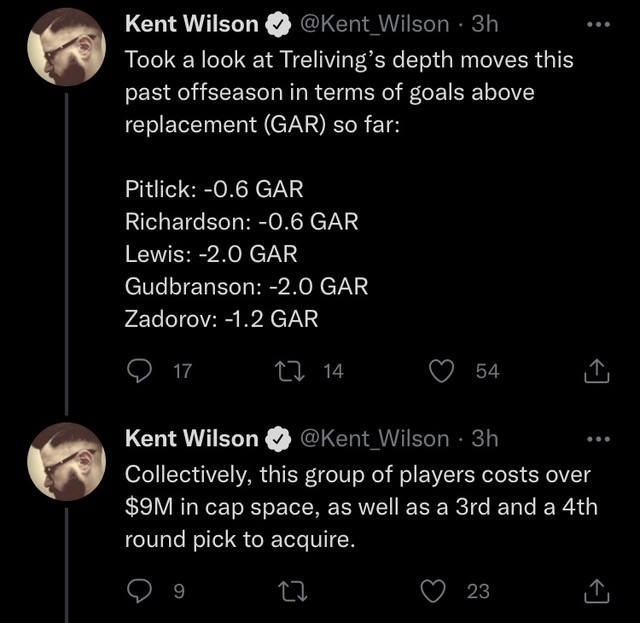 Do you agree with this criticism?

The Flames didn’t bring in any of these guys to score goals. They were brought in because they provide a physical presence that the Flames direly lacked and to fit within a system that shuts down the opposition.

Zadorov deserves a game or two in the press box, but for a lack of offensive production?

It’s understandable that people look for answers when the team has gone cold. Again, there’s answers such as a lack of consistency in the schedule, potential unannounced injuries to the starting goaltender or the team’s fringe offence players finally coming down to Earth, but if people decide the shut down guys should be scoring more then we might be going down the wrong path.

(Markstrom takes today’s practice off for maintenance. He has dealt with minor injuries recently and posted a .882 save percentage last night)

For fun, let’s look at the losses to Ottawa last year just based on results:

Two of the three wins featured more than one goal from the first line. The other had Dillon Dube looking like a first line player— he had a hat trick in a 7-3 win on March 4th.

It’s just annoying that role players get the lazy treatment of stat criticism. The players listed by Wilson weren’t signed with the expectation of putting up a 30 point season. They weren’t getting credit when the Flames were going on winning streaks, but now that questions need to be asked, their 13 minutes a night is the reason the top six can only put up one goal on Matt Murray.

Offensive production aside, the whole team needs to adjust how they move the puck up the ice and the higher end players need to play to their potential. That’s how they were winning games earlier in the season.

It all just seems like madness. We’re not even half way through the 21-22 campaign and critics are pressing the panic button. Teams play through cold streaks and playing through one now as opposed to later in the season or the playoffs could be a blessing in disguise.

A phone interview comes to mind.

Jacques Lemaire was chatting with one of the guys on the Fan 960 back in 2016. The topic was about the Columbus Blue Jackets and their 15 (at the time) game winning streak. Forgive the paraphrasing (blame Rogers for locking up the audio archive the Fan 960 made available) but Jacques essentially stated that while they look unbeatable right now— there is no way the Blue Jackets are getting anywhere near winning the Stanley Cup. They are a victim of timing. Teams can only get so hot for an unsustainable amount of time.

The Blue Jackets won one more game; coming within one win of tying the NHL record of 17 set by the ’93 Pittsburgh Penguins. They were later eliminated in the first round in five games by the same franchise. The Penguins that is.

So, while this cold streak has been tough to process— don’t give up hope. There are ebbs and flows to every season. The Flames will eventually pull out of this nosedive. Whether they can find a way to consistently beat the Ottawa Senators is far less certain.