Wanna blog? Start your own hockey blog with My HockeyBuzz. Register for free today!
Follow @tylertyping

You might be wondering why I went this random with my spotlight.

I mean, Adrian Aucoin only played a couple of seasons in Chicago, totaling just 92 games. And those 2 seasons from 2005-2007 were very unforgettable to the Blackhawks Captain as he was marred by injuries and didn't put up the offensive numbers the Hawks needed him too.

Stay with me though as this spotlight is a bit of a theme this week, as this Aucoin article is as much a flashback as it is a tale of influence.

On Friday, I will be releasing a blog on the influence of Duncan Keith and how important he will be moving forward in Chicago.

With Aucoin, he was brought in after the 2004-05 canceled season due to the NHL lockout.

At the time, he was a welcomed sight on the backend that struggled mightily for consistency in years prior.

Dale Tallon did his best to shore up the leaky defensive play in Chicago; the offense needed work too, but he bet big on improving the goals against category by bringing in Aucoin, Jassen Cullimore, Jaroslav Spacek and his big splash, Nikolai Khabibulin.

"The Bulin Wall" and Cullimore were coming off of a Stanley Cup win in 2003-04 but it was Aucoin that was brought in for his high character and leadership abilities.

Aucoin was named Captain after his signing by Head Coach at the time Trent Yawney. His goal was to turn around a struggling Hawks team and mentor the younger players.

Two of Aucoin's pupils on the backend in 2005-06 were first-year defencemen… wait for it… Duncan Keith and Brent Seabrook.

Keith actually lived with the Aucoin's early on in his career. The Hawks did this on purpose, just like Patrick Kane living with Stan Bowman to start his NHL career and Kirby Dach living with Seabrook last year. Aucoin was brought in for a purpose and while his playing time in Chicago didn't go as planned, his long-lasting effect still lives through in guys like Keith and Seabrook as they leaned on the veteran early in their career.

Aucoin did finally enjoy some success in Chicago as he ended up back with the Blackhawks organization doing what he did best – teach. He was a Player Development Coach from 2013-15.

Let's take a look Aucoin's player career in a snapshot: 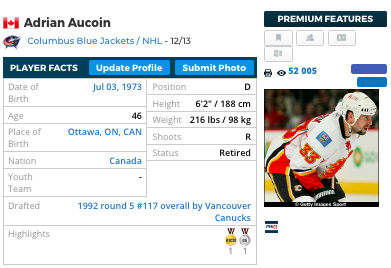 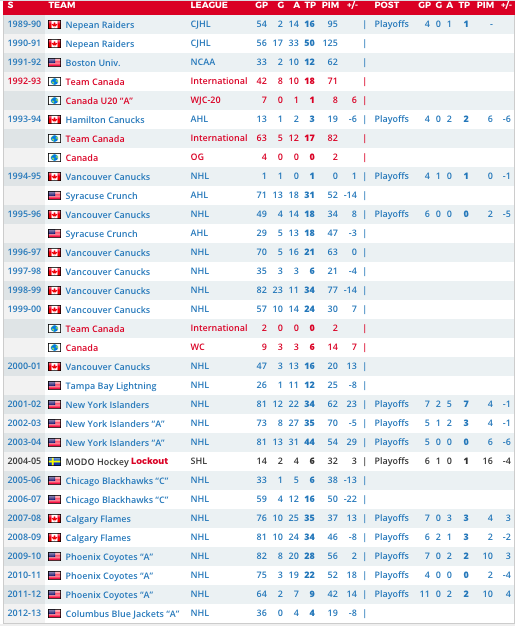 How did the player join the Blackhawks organization?

I gave it away in the above that Aucoin was signed as a UFA in the summer of 2005.

Why was he, Cullimore, and Spacek targeted to help improve the D? Well, let's take a look at where the Hawks were on the back end at this time.

Bryan Berard was solid and would have led the Hawks entire team in scoring if he had played the entire year; he notched 47 points in 58 games.

Those are the offensive numbers, but their defensive play wasn't much better.

While Aucoin struggled due to injuries, he put up respectable numbers after he left Chicago, so the thought process was a good one by Dale Tallon.

Had Aucoin not been injured for most of his time in Chicago, he maybe would have enjoyed a longer career in the Windy City.


Why this player stood out for me?

I remember that summer well as I was very excited to see the NHL returning after a year layoff.

The signings of Aucoin and Khabibulin were huge as it signaled that impact players were willing to come to Chicago to help bail out the sinking boat.

Also, regardless of his injuries, he was always a stand-up guy and lead by example. I remember him being a big influence on Keith, Seabrook, James Wisniewski, and Lasse Kukkonen who were trying to find their way as pros

I actually had the chance to interview Adrian when I covering the Blackhawks rookie tournament in London, ON when I was writing for a website called The Hockey Chat.

Aucoin was a Player Development Coach and helping out with the tournament. Here is that interview I dug up from that story from 2014:

Q: You've been with the Blackhawks as a scout since 2013, but this is your first Rookie Tournament - correct?
A: Yes.

Q: What does the developmental team hope to gain from this event?
A: We like to get a small glimpse of how the recently signed or a select few unsigned players adjust to a faster pace game than they're used to. There are players here that are bigger and stronger, so it's a challenge for some. We also have some kids who have played a pro season so we're hoping they're more advanced and will show it. But it's realistically only 3 games and a small window.

Q: Was there anything like this when you were playing?
A: There might have been but I wasn't a high enough prospect. Haha.

Q: What have you noticed with these young players in terms of preparation for their seasons compared to how it was when you were coming up? It seems like they train 365 days of the year (no offense to your generation).
A: The kids are light years ahead of where we were in my days. They are mentally, physically and theoretically more advanced. There aren't very many excuses anymore. They have the best of all resources available to them now for their offseason preparation. The game has truly gotten so much better.

Q: How do you select the players for this event? What's the process?
A: I don't have much input. It's mostly our management team with some of the scouts. We obviously have our first year Rockford players who are under contract and they sprinkle in potential free agents or players that they want to take a closer look at. Our league GM, Mark Bernard, plays a huge role as he is looking to advance our young guys and fill roster spots for Rockford and our ECHL affiliate the Indy Fuel.

Q: What is your specific role for this tournament and then during the season?
A: This tournament is mainly for the evaluation of our players here. I haven't seen a few of the recently signed players that much or the unsigned players. I look at their strengths and weaknesses, their roles in our organization and their potential start to get sorted. I work with the rest of the development team and management on the process of continuing to work specifically on how to help with their development. I've also been on the bench coaching the defense with our head coach from Rockford, Ted Dent, so it's been quite hands on and very exciting. Over the course of the year I work specifically with the defense corps in Rockford and help with their development for their advancement to the Blackhawks. We have an entire development team headed by former NHL coach Barry Smith that works together. It plays a big role within our organization.

Q: You looked pretty comfortable on the bench this weekend, is coaching something you are looking to get into?
A: I'm very happy with my development role. The Blackhawks organization puts a huge amount of importance on our development team, which includes the minor league coaches. Being a coach is a great job yet it is something that involves a massive amount of time and dedication. Coaches at this level are beyond professional and obviously the best in the world. I've learned a lot just helping Ted this weekend.

Q: Any players (on any team) you're excited to see that you haven't had a chance to watch in person yet?
A: I've seen most of our top forward prospects play in Rockford this past year. I've had a glimpse of our young defensemen at our prospect camp in Chicago earlier this summer but it was nice to see kids like Van Riemsdyk and Fournier play at a higher, more professional level. They've both already shown great signs over the first 2 games.

Where is the player now?

Well, he didn't see coaching as a career path in 2014 when I interviewed him, however, that's the route he ended up taking as an Assistant Coach in Chicago with the Missions.

Aucoin did this to coach his son Kyle for a few years who is now eligible for the 2020 entry draft. He's committed to Harvard University in the fall.

Funny story – Kyle, who is still fond of Duncan Keith from his time living with the Aucoin's, models his game after the long-time Blackhawk, not his father who played over 1,100 himself. I think his father is more than ok with that.

As I mentioned above, I wanted to cover Aucoin his story in Chicago is a perfect segue into how important Duncan Keith will be for the Blackhawks on and off the ice, even as he approaches the end of his career.

I look forward to sharing that article on Friday.

What are your memories of Adrian Aucoin?

Stay safe and see ya out there!

Join the Discussion: » 103 Comments » Post New Comment
More from Tyler Cameron
» Farewell
» My Favourite Blackhawks Team
» What's the future in net for the Blackhawks?
» What could the Blackhawks look like next year?
» Mailbag - Blackhawks Postmortem Edition