Wanna blog? Start your own hockey blog with My HockeyBuzz. Register for free today!
One of the bets the Penguins are making for the 2019-20 season is that Jared McCann will be a highly functional top nine player capable of providing offensive depth. Pittsburgh’s offensive attack is going to be more spread out this year as they are down a star forward with Phil Kessel leaving. Sidney Crosby, Evgeni Malkin, and Jake Guentzel are the most surefire components the offense. This leaves a by committee approach including players like: Alex Galchenyuk, Patric Hornqvist, Dominik Kahun, Dominik Simon, Jared Mccann, Bryan Rust*, and maybe Brandon Tanev. Most of those players have some uncertainty about them for various reasons.

Today I’m going to focus on McCann. He was a nice “throw-in” when the Penguins dumped off the underachieving Derick Brassard to the Florida Panthers. In 32 games with the Penguins McCann had 11 goals and 17 points. The general consensus is that he did a good job jumping up to join Crosby and Guentzel on the first line. One of the unknowns is how McCann will fare when/if he gets more time on the top line with Crosby. He could be one of those players that can play the part and allow the depth to be spread evenly throughout the lineup. This would be an ideal situation.

What is working for him is the fact his quality of teammate has been lacking his career and if he can stick with Sid it will be by far the best of his career. Here’s a look at McCann and his top three most common forward linemates each year of his career and the time he spent with them

Not very impressive. The 2016-17 season has two really good players, but you can see the sample is minimal. McCann only played 29 NHL games that year. With this information in mind let’s look at McCann’s baseline for how he has performed over the years. I will then compare that to his smallish sample with the Penguins last year. From there we’ll try to project forward

You can see that McCann has a history of being a replacement level player offensively. The trick here is to separate how bad his teammates have hurt him over the years. For that I’m going to try and use some information that tries to separate a player’s actual value when taking into account their QoT and score-effects. I am going to show McCann’s 2017-18 and 2018-19 sample in Florida and also his 2018-19 sample in Pittsburgh

Here is his 2017-18 impact both offensively and defensively 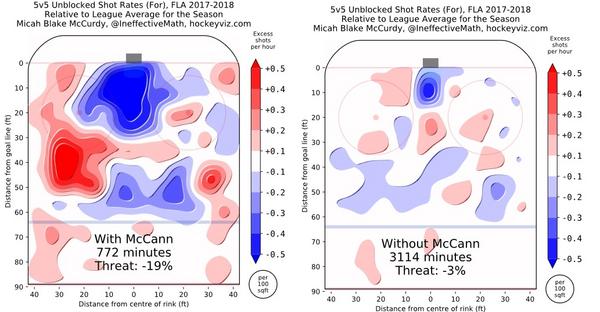 Yikes, not great. There is a huge gap in quality that does not favor McCann. The good news is that defensively McCann was a positive influence 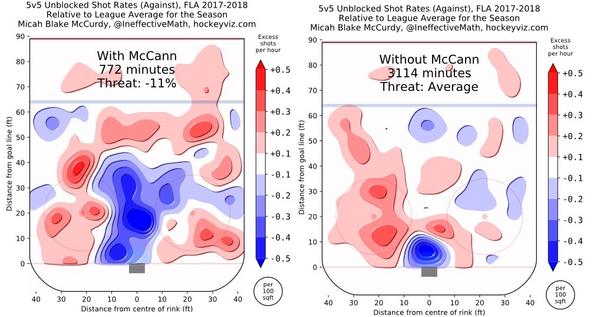 Much better. Although if the Penguins are looking for depth offense from McCann this isn’t a good start 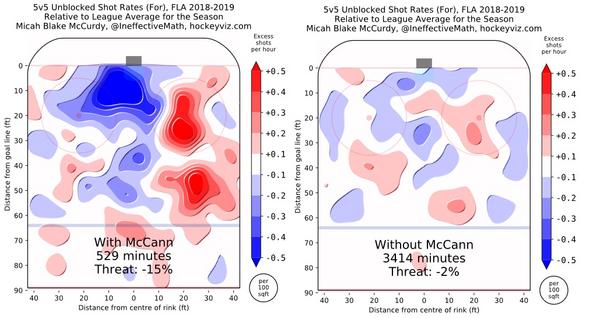 Similar to 2017-18 his impact is a big negative offensively, but his defensive impact has slipped and is below average versus the Panthers team without him which was above average 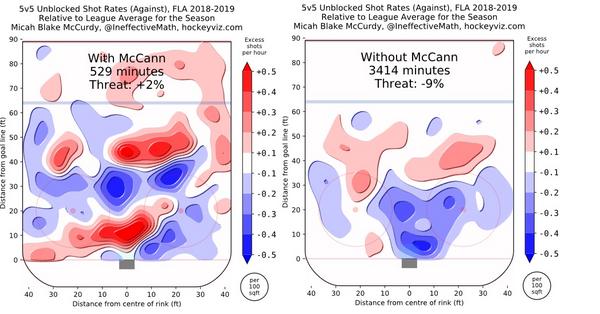 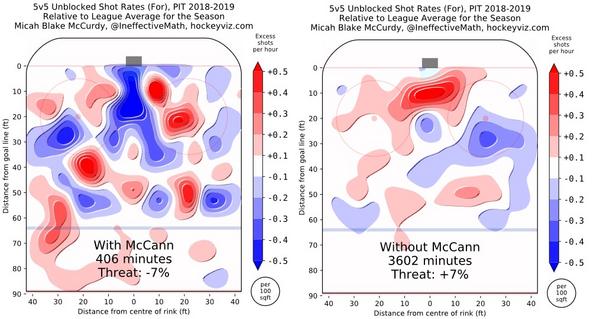 The underwhelming offense continues. This may surprise some people because of the 11 goals, but it is worth remembering that he scored four empty net goals and three shorthanded goals. That leaves only four goals at 5v5. His Penguins 5v5 points per 60 was only 1.33 which is right in line with his Florida samples. If you’re looking for a positive his points per 60 jumped to 1.86 with the 128 minutes he played with Crosby. It isn’t a large sample, but we know Crosby has a positive impact on his linemates. The question will be if the Penguins want to drag a 1.33 player to 1.86 or to use somebody with better numbers and inflate those ie Hornqvist. There are many paths Mike Sullivan can take to create his forward lineup this year. There are a lot of interchangeable parts. There are going to be some growing pains.

If it were me I would want to try to find out as much about McCann as possible early on in the process. Feed him minutes with Crosby and Guentzel throughout training camp to begin the evaluation process and have that bleed into the start of the regular season. If it stalls out in October at least you know more than you otherwise would have and you learn it earlier than later. You can always place Hornqvist on the right side with Crosby and Guentzel. Hornqvist needs Crosby or Malkin to transition the puck so he can camp out and collect his high-danger chances in front of the net after all.

After looking through McCann's Florida and Pittsburgh results and accounting for his QoT I see a player the Penguins might be asking to do too much in 2019-20. There was a lot of buzz surrounding McCann and how he was quietly the steal of the trade. The fact is he has room to improve and will need to. He is entering his 23 year old season which means there still might be some slight growth. To be an impact player on a team trying to contend he is going to need the growth to happen.

Realistically, it is probably wise to temper expectations of McCann due to both his Florida and Pittsburgh samples.

Join the Discussion: » 69 Comments » Post New Comment
More from Ryan Wilson
» Regression may be looming for Penguins finishing ability
» Sidney Crosby goes Wild in return to lineup
» Looking back at Ray Shero with the Devils
» Penguins prove they McCann hang with the Avalanche
» Do the Penguins actually need Sidney Crosby?