With yesterday's announcement of Philip Holm signing with the Blackhawks adds to the plethora of defencemen in the organization.

Holm is a 27-year-old left-handed defenceman. He's not amazingly gifted offensively, nor is he outstanding with his defensive play. He appears to be an average bottom pairing guy for the Hawks to stash in Rockford. 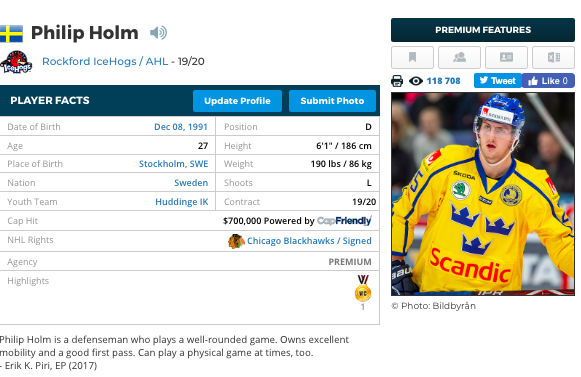 Sure, Holm will have his sights set on making the Blackhawks but it's already very crowded with 8 D on NHL contracts. The fact the Holm's contract is a two-way deal will not work in his favour.

What will work in his favour is heading to Rockford and being a veteran leader there. He has spent most of his time in the SHL, however, has had a taste of North America with 1 NHL game and a solid stint in the AHL (38 points in 63 games) in 2017-18.

Last season, Holm took his talents back overseas and played in the KHL where he became an All-Star.

While he may not seem like a "veteran" at 27-years old, he's well-traveled and will be the oldest IceHogs D of the roster.

So, another D added… hmmmm. The Hawks are going to have a lot of options in Chicago and Rockford, with spillover into the Indy Fuel.


Then added another 3 on AHL-only deals (Osipov, Ryczek and McArdle).

I will have my own analysis of what I think will happen in on the backend.

But first, I want to get your thoughts today on what your ideal grouping of defenders as it stands today in Chicago AND Rockford.

Who is your ideal 7 or 8 in Chicago? Who is best served playing in Rockford and who should get the majority of playing time down there?

Lastly, if you're on Twitter, you have to be following Robin Lehner. He is quite active and is very inspiring as he continues to be a role model in the mental health space.

#SameHere is an expression which means: I've faced challenges in life too. Those challenges have affected my mental health. It's a sign that we hope will unite the world to once and for all, normalize how universal this topic is. pic.twitter.com/gWsuDIwkMR

… also, sweet mask! Can't wait to see him in it come September.


See ya out there!

Join the Discussion: » 109 Comments » Post New Comment
More from Tyler Cameron
» My thoughts… in the form of a podcast
» Toews earning that $10.5M contract
» The rollercoaster continues
» Up and down we go
» Hawks lose to Flames, lose Strome