Wanna blog? Start your own hockey blog with My HockeyBuzz. Register for free today!
Monday is deadline day and the rumors are going to start heating up. Pittsburgh may find themselves in a few of them although it may not always be for the best. For example:

Assuming Bogosian clears unconditional waivers today, I expect he will wait until Monday to decide where he wants to play for the remainder of the season. Toronto, Pittsburgh, Carolina and Winnipeg are among the strong contenders.

The Penguins already have one Jack Johnson, but how about if we get a right handed version of him? Now that might be a little harsh on Bogosian because he has more of an offensive pulse than Johnson, but it isn’t far off. He has been a player, much like Johnson, who gets more rope than other players because of his draft status and not the actual on-ice production. I don’t see a need for the Penguins to acquire this player. They already have their a cheap depth right handed player in Chad Ruhwedel 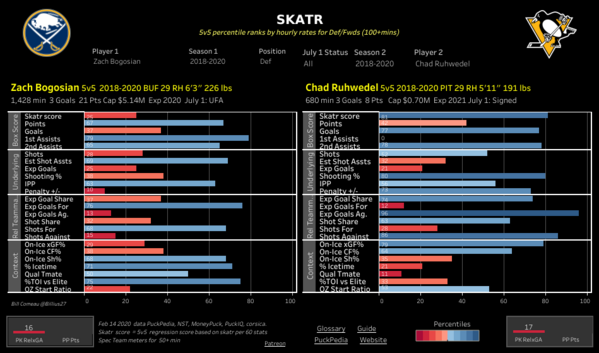 The biggest difference is Bogosian gets a way better quality of teammate and more ice time. Ruhwedel has way better shot share and xGF%. When the Penguins are healthy they have Letang-Marino-Schultz-Ruhwedel and it is fine. I just don’t see a need for Bogosian. Unless…

The Penguins are looking to move Justin Schultz in a hockey trade. Schultz hasn’t been good for a while. Some if it is injuries and some of it has been his deployment with Johnson. Schultz was never a polished product when the Penguins acquired him and he remains the same now. Giving him his next contract will likely be a bad move for whoever that team is. The only way I see Bogosian as feasible (and I’m not endorsing the move) is if Schultz is moving out. 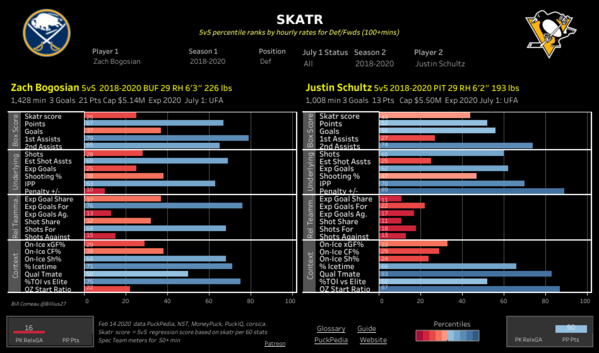 Rutherford has shown a liking to bigger bodied defenseman who play physical in recent memory with Erik Gudbranson being the most recent example and Jamie Oleksiak being another one. Rutherford is usually good for at least one mediocre/bad defenseman at the deadline with Ian Cole (best of the bunch), Trevor Daley (great move to get rid of Scuderi), Gudbranson, Ron Hainsey, Mark Streit, and Ben Lovejoy. The point is you can’t rule out the Penguins interest in Bogosian because there is a history of the general manager acquiring veteran defenders at the deadline. I’d pass on Bogosian. We’ll see what the Penguins do.