Wanna blog? Start your own hockey blog with My HockeyBuzz. Register for free today!
Does Jim Rutherford have a Tanev fetish? He might. He has a Kapanen one. Come to think of it he has a Staal one, too. There is some speculation circulating about the Penguins interest in Chris Tanev.

Teamed up with ⁦@Real_RobRossi⁩ for this article. Lots of trade talks are underway and a certain Penguins forward is coveted. What will happen next? Here’s what we are hearing: https://t.co/GyIfbXLQEw

Adding a right-handed shot defenseman is a priority for the Penguins, and Rutherford is expected to try clearing enough cap space to pursue Christopher Tanev on the open market, multiple team and league sources said.

Tanev is the elder brother of forward Brandon Tanev, the Penguins’ big free-agent signing last offseason. Christopher Tanev is set to turn 31 in December, but his age is not a concern for the team. And Rutherford is not averse to extending Tanev an offer that would run concurrent with the final five years of Brandon Tanev’s contract, the team source said.

Christopher Tanev is seeking a raise on the $4.45 million he counted against the cap on his last contract, league sources said. The Penguins plan to play up uniting with family and Pittsburgh’s lower cost of living to entice Tanev, but their preference is to keep his cap hit from exceeding $5 million, a team and league source said

Woof. This is a terrible idea. Let me first say I think Chris Tanev was a good defensive defenseman for a chunk of his career. Tanev played locally for Rochester Institute of Technology and was part of the Cinderella RIT team that made the Frozen Four in 2010. My friend who coaches with RIT recruited Tanev to the college. I’ve always been a fan for those reasons. However, it is 2020 and he doesn’t provide proper value for what he will get and furthermore he isn’t a good fit for this Penguins team. I don’t want more defensive players. Why are the Penguins looking to spend big on another right handed defenseman when they already have Kris Letang and John Marino? They would be way better off just letting Ruhwedel play for close to the league minimum than investing in Tanev at this point. 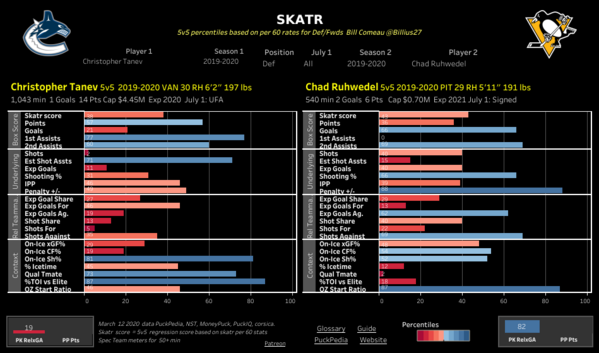 You are really flirting with another Jack Johnson situation here. Tanev isn’t the player he was. He is a net negative offensively and his defensive work isn’t good enough to overcome it. I hate the idea of tying up another mid-tier contract on an aging defensive player. It isn’t going to get the team over the hump. Get guys who can create and get the most out of an aging Crosby and Malkin are going to help. Tanev won't do that. 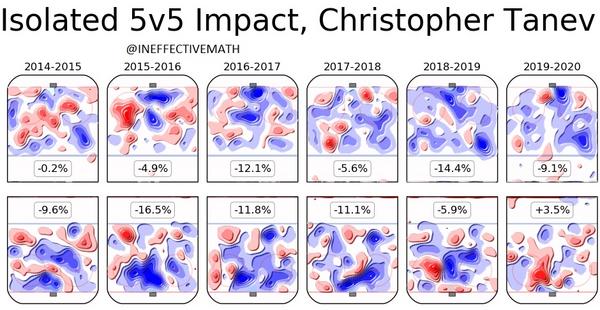 Tanev is already 31 and if Rutherford wants his contract to match up with his brother you now have an aging and declining Chris Tanev for another five years to pair with an aging Jack Johnson. The Penguins cannot afford anymore self-inflicted errors. This is ludicrous.

How will the Penguins make room? Uh oh

Several NHL general managers have inquired about Rust with Penguins GM Jim Rutherford, who is not actively shopping Rust and would prefer to keep his breakout top-six winger, according to multiple league sources, who spoke on the condition of anonymity due to the sensitive nature of trade discussions.

However, the Penguins have not outright dismissed trading Rust, a team source said. Rutherford would be open to a deal if the return was significant, and the league sources said any trade would need to net the Penguins at least an NHL-ready player and a top prospect. The Penguins don’t think Rust is untradable, but any deal would require a substantial return.

Listen, I’m not totally against trading Bryan Rust. He is coming off of a career year and there is reason to believe it isn’t repeatable due to his 17.9 shooting percentage. However, I’m sure as hell not moving him to clear up space for Chris Tanev. Patric Hornqvist isn’t a top six winger anymore, but he would be with Rust gone. There is not guarantee Kasperi Kapanen is a top six winger. Rust is good value at 3.5M even with the shooting regression on the horizon. If somebody bowls the Penguins over, sure you think about it, but then you have a hole on the right side that isn’t internally fixed. The 3.5M cap hit isn’t that big and you surely won’t find Rust’s 3.5M value via free agency. You wouldn't have the money anyways because it would be tied up in Tanev's new deal.

I really hate the idea of clearing space for Chris Tanev, but it would totally be on brand for Rutherford. This Penguins era is at serious risk of going out with a weak whimper if this is the path taken.