Wanna blog? Start your own hockey blog with My HockeyBuzz. Register for free today!
While no trade has been announced, the Calgary Flames are once again this summer the talk of the hockey world as now several media members are starting to report that a trade involving Matthew Tkachuk is imminent.

Eric Francis had this to say: 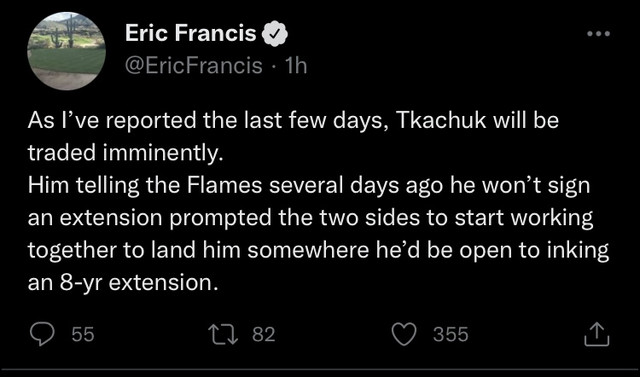 While Jeremy Rutherford of The Athletic broke that, per his sources, the restricted free agent left winger will not be signing a long term extension with the Flames. 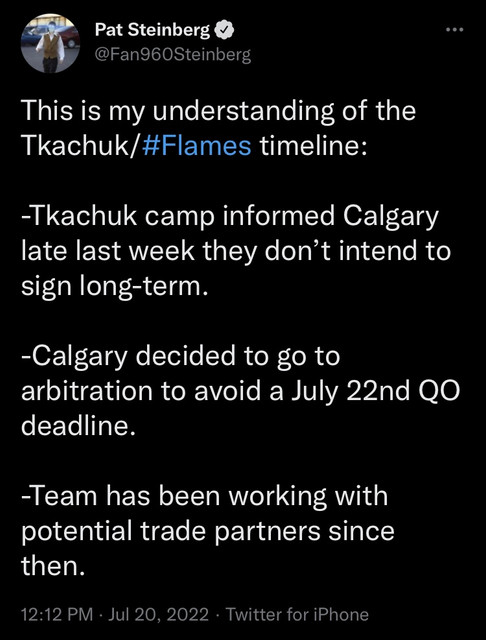 It’s hard to make a case for the Flames to achieve greater results than last year’s sixth place, 50 win, 111 point campaign, but here we are. One of the greater exoduses in the history of the organization. Let’s give it a shot.


Space
Like it or not, the Flames have opened up roughly 20 million dollars in long term cap space for the foreseeable future. Both cap and roster space will lead to some compelling storylines. Especially with the success of the Flames’ affiliate. You could even posit that committing that much cap to two players that have never really taken over a series might be a decision made more on pride of loyalty than an objective approach to success.

The matter of cap space will need to be addressed after we find what the return on Tkachuk ends up being, but the word “possibility” is always fun. On that note.


Change is Exciting
Different players getting a shot at first unit powerplay time as well as choice offensive shifts will be an interesting ride next year. Less star power is going to push the dynamic of the team to more of a committee based approach to winning games. Overall, next season will be a change in experience. Whether that’s a more stuffy defensive style, a different approach to developing plays in the offensive zone, or..


The Team Gets Tougher
It’s getting a bit repetitive and I’m sitting on Shuswap Lake with limited reception, so if you want a look into the lack of physicality on the Flames this last playoffs, just peruse one of my pieces linked at the bottom. It’s been a recurring theme this offseason. The Flames could certainly be a meaner team to play against.

Tyler Motte, Michael Raffl and Brett Ritchie are all still available as UFAs. Imagine Darryl Sutter coaching a team with all four lines committed to making the opposition’s life miserable when they are in town.


The Return
It’s tough to say what a return will look like. St. Louis insider Jeremy Rutherford stated on the 101ESPN Podcast that he had heard a return of Torey Krug, Jordan Kyrou, and a first round pick was discussed. That seems like a lot. If the Flames can get five years of Torey Krug and a year to convince Jordan Kyrou to sign an extension, that should be a done deal. Something tells me it’s less. Here’s what Ryan Leslie has heard. 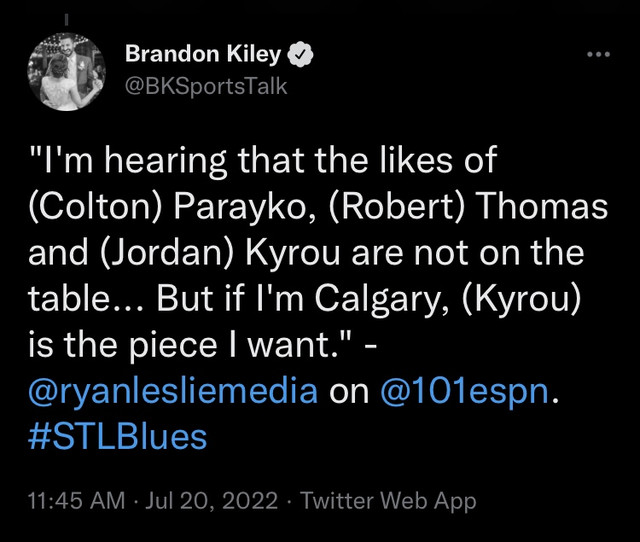 Something along the lines of Jordan Kyrou and Jake Neighbours might be a more reasonable compromise.


Stats via naturalstattrick.com, moneypuck.com, and nhl.com. Graphics courtesy of nhl.com.