Wanna blog? Start your own hockey blog with My HockeyBuzz. Register for free today!
The Penguins and Kasperi Kapanen have come to terms on a two-year 3.2M contract. Here’s the best part, that is per year.

This stinks. The player is atrociously limited in what they offer and there aren’t even opportunities for him to get boosted by his teammates because the top six should be the following:

He doesn’t deserve to play over anybody in this group and yes that includes Jason Zucker. Who is he going to play with, Jeff Carter?

I'd like to try and let this marinate a little because if they signed him to trade him it would be an acceptable outcome. Although, who is taking on the contract? There aren't that many buyers in the market. Paying him 3.2M after his horrendous 2021-22 season with the limited money they have is a horrible self-inflicted error. 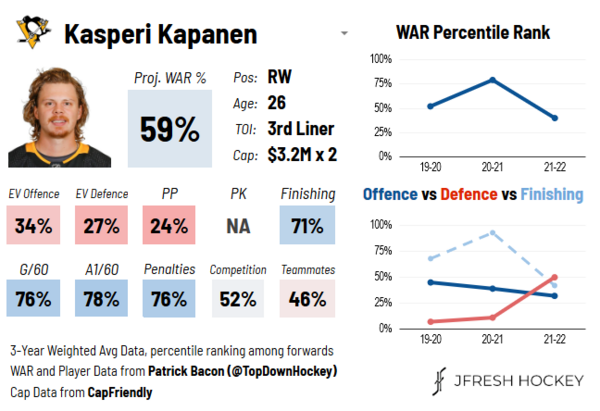 As an NHL player Kapanen is a leach. He needs others to prop him up because he certainly does not contribute to driving play or anything along those lines. His physical attributes, while evident, do not help his linemates. If he is not scoring, he is not helping. He does not generate quality shots. His success is driven by his ability to score on low percentage plays. This is neither sustainable or desirable to have at 3.2M per year. He did nothing to deserve this dollar amount. This was entirely avoidable. I fail to believe the arbitrator would have awarded something at this number or higher. He scored 11 times last year. That’s the only thing he can do.

The Penguins are now pretty much out of money. As things stand, I think they are worse than the team they put on the ice last year. Trades will have to be made to improve the roster. It would be nice if Kapanen was one of them. It is likelier we get a healthy dose of him pulling up on the rush this year next to Malkin.

For some reason this franchise loves the player. They have now spent two first round draft picks on him followed by a higher than market rate extension. And they wanted to play hardball with Malkin? Yeesh.