Wanna blog? Start your own hockey blog with My HockeyBuzz. Register for free today!
Update: Steve Macfarland of Calgary Hockey Now is saying he has tracked down a confirmed rumour via an NHL executive that Treliving shot down an offer of the second overall in the 2022 NHL Entry Draft, a prospect and a roster player for Matthew Tkachuk. Wow. What could have been. 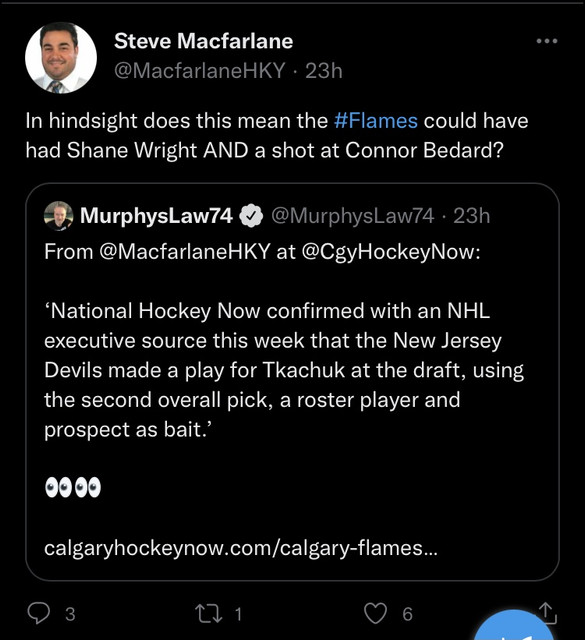 With the Calgary Flames electing to file for salary arbitration with Matthew Tkachuk, general manager Brad Treliving has pushed away the legality of offer sheeting the star winger, but put the organization on a one year clock to find a deal or pull off a trade for his rights. Had a team went ahead with an offer sheet, the Flames would not have been allowed to trade the 24 year old until one year after deal signed commenced. Unfortunately, that would walk Matthew straight to unrestricted free agency with no possibility of recouping assets.

In short, the Flames have twenty days as of the publishing of this piece to get some value out of the star winger given that he’s already made his intentions known in that he won’t be signing-on long term in Calgary.

If you haven’t noticed, every hockey writer and their mother have written something outlining potential deals for Tkachuk in the past few days. The value of various players have been assessed and weighed in order to find what would be deemed a “reasonable trade”.

One aspect that seems to be missing from most of these offers is that Brad Treliving has been going out and getting head coach Darryl Sutter’s picks for roster players as of the hiring of the 63 year old from Viking, Alberta.

The unfortunate truth is that there is no way that this scenario leads to the Flames becoming a more talented team when all is said and done. According to Sutter, one goal that the Flames worked hard towards achieving last season was finishing the year with the lowest goals against average. A mark they fell just short of. 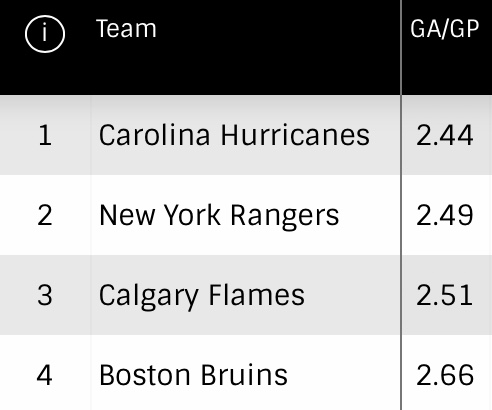 While it will be difficult to replace the impact of Gaudreau and Tkachuk on the defensive side of the puck, moving Tkachuk in order to make the team more difficult overall to play against would certainly be an interesting pivot.

So, with that in mind, here are a few theoreticals that may be in line with that concept.


Nashville
A deal with the Predators would be easier to capacitate than most teams provided they have a little under 4.1 million in cap space remaining with only Yakov Trenin to re-sign as an RFA. Also compelling is that Matthew Tkachuk has put up some of his greatest highlights against the Predators. His between-the-legs one-timer in overtime comes to mind.

Granlund provides cap balancing as well as a second or third line shutdown center role, but really this trade is about the other two pieces. It would take moving heaven and earth to pry Tanner Jeannot out of the Predators organization, but a +100 point power forward signed long term just might do it.

Led all forwards in hits? Ah, yeah Sutter would probably like that guy.

The number alone says a lot, but watching him throw those hits is something else. These aren’t small bumps, if there was a stat for knocking players off their skates— Jeannot would lead that category by a country mile.

L’Heureux plays a similar game. When he hits; he hits to hurt. Here’s what EliteProspects had to say of him in their 2021 draft guide:

So much of L’Heureux’s game is defined by his physicality. He’s an enthusiastic hitter, one who’s put more than his fair share of poor opponents into the boards or onto their asses. He’ll get under his opponent’s skin after the whistles. He’ll fight. He’ll mix it up. His problem-solving ability through secondary and tertiary defensive variables lets him make plays where others would struggle to retain possession.

Zach is no slouch on offence either. He’s been above or around a point per game since his rookie season despite being caught on second line duties due to an abundance of depth on Halifax.

The Flames were picking a little to early last year (Coronato at #13) to take a flyer on the 5’11” 200lbs power forward, but have undoubtedly given him a few looks given he plays on a team with defensive prospect Cameron Whynot on the Mooseheads.


Montreal
This one will get some pushback from almost everyone reading. Hit refresh ten times on your browser to access the secret apology paragraph at the bottom.

Montreal currently only has $249,334 in cap space, so the 11-some million heading over would require a balancing act cap-wise. Anderson and Dvorak add up to 9,950,000 in cap hit between the two of them. A third party such as the Coyotes may need to be involved in a secondary trade to get the Habs cap compliant. Another obstacle is Josh Anderson’s eight team no-trade list.

The Canadiens do this to get a star winger for Suzuki who can aggravate at a similar level to Gallagher. If you’ve played enough hockey, you might be familiar with the Lightning Rod Concept. If you have two players disturbing the peace on one team in the same game— one player usually catches the brunt of it from officials while the other generally flies under the radar and does as they please. Tkachuk and Gallagher would terrorize.

The return would be three very “Sutter” players. Josh Anderson provides quintessential size on the right side. 6’3”, 227lbs and moves surprisingly well for someone of that stature. Christian Dvorak is the shutdown center that Darryl wanted in Calle Jarnkrok. The 26 year old has been playing that role for the last three seasons.

Pezzetta is a fan favourite and is about as close to Ville Niemenen as you will find in 2022. He’s a good size at 6’1”, 216lbs and has plenty of tread on the tires having played only one season by the age of 24. His ability to agitate is already top tier. His hitting game is sublime as well. He averaged 7:50 of ice time per game over 51 appearances and threw 156 hits over that time. That’s a league leading 23.42 hits per 60 minutes of play among players dressing for at least 15 games.

The picks are altogether necessary for a trade like this. A 103 point winger and a 31 point defenceman for two 30 point forwards and an 11 point fan favourite winger doesn’t quite add up. Even if all three coming back are valuable role players.


St. Louis
A trade with the Blues seems most likely, but also the least supportive of the idea that Treliving will be targeting abrasive players that can also put the puck away.

The first issue is the amount of players they can’t trade to Calgary.

The second issue is that the Blues only have 625k in cap room.

The bright side is that the widely rumoured return in Jordan Kyrou doesn’t have an NTC in his contract and carries a 2.8 million dollar cap hit. The winger would open up a lot of ice with his speed and would likely form out a first line of Mangiapane-Lindholm-Kyrou.

The problem standing is that Kyrou’s 2.8 million dollar cap hit won’t balance the swap cap wise, and the guys that could be added to the trade to fit the Blues under the cap have the ability to say “No. I’m not moving to Calgary.” Ryan O’Reilly and Rob Thomas notwithstanding.

With that said, let’s go out on a limb and assume that Pavel Buchnevich’s seven team no-trade list somehow neglected to include Calgary due to California’s similar tax rates factoring in as well.

Even with the stars aligning to make this offer work, the Blues would find themselves 1.95 million over the cap. Bolduc’s inclusion is more value-based due to him being a prospect, but he is a fun player to watch in terms of his deceptiveness on the rush.

The pressure will be on Blues general manager Doug Armstrong to find a way to get a deal done. It would be nice if Brad Treliving wasn’t the only GM scrambling during negotiations. Left in that scramble would be any notion of picking up players Darryl Sutter would particularly prefer.


Long Island
There certainly seems to be a goldilocks factor to the Islanders. 11.185 million in cap space with only Bellows, Dobson and Romanov left to sign. An enticing market for Matthew to play in along with an elite center in Matthew Barzal. Plenty of roster players to send off and they’ve retained every one of their own picks for the next three years all the way up to the seventh round in 2025. Not bad.

There’s also a few players that Darryl would surely enjoy coaching. Here’s an offer that would make some sense.

To the Islanders
Matthew Tkachuk

The painful part that comes with this offer is the lack of talent heading the other way. A third or fourth line center and a hard hitting, up-and-coming top four defenceman doesn’t really justify trading an elite scoring winger with even more impressive two-way statistics. Hence the amount of draft capital.

With that said, both of these guys hit like a truck and can hold their own defensively. Cizikas is locked down for five more seasons and Romanov is within RFA control. Add these two and then sign Tyler Motte, Micheal Raffl and Brett Ritchie as free agents to bolster an already gritty forward group? You’re looking at the meanest roster in the modern era led by the most recent recipient of the Jack Adams Award for best Head Coach during the 21-22 season.


Stats via naturalstattrick.com, moneypuck.com, and nhl.com. Graphic courtesy of nhl.com.