Wanna blog? Start your own hockey blog with My HockeyBuzz. Register for free today!
Hello All,

I hope everyone is having a super duper week. Today I wanted to take a look at the state of the roster as well as big picture what I think the Caps are positioning themselves for.

Top Capitals have 11 total players on their roster that are a pending UFA at the conclusion of the 2022-2023 season. The next closest team with this many number of pending UFAs was Toronto with 8. Not many teams have more than 6 and yet the Capitals have 11. The Capitals made some savvy moves this offseason with many solid free agent acquisitions. Guys like Brown, Strome, Gustafsson, Johansson, and Irwin were all signed to 1-year deals. Pretty wild. The Capitals are clearly hedging their bet when it comes to Nicklas Backstrom. With Backstrom's future a big question mark, its hard to appropriately build a roster when you may or may not have roughly $9,000,000 against the Cap to plan for. This flurry of 1-year deals gives the Capitals a competitive squad for this upcoming season. If Backstrom cant go next season (2023-2024), the Capitals are going to go absolutely nuts with another loaded free agency class. Hopefully either/both Strome and Brown catch fire here and DC and decide they want to stay next year for the foreseeable future.

Here is a picture of the Capitals Cap Central: 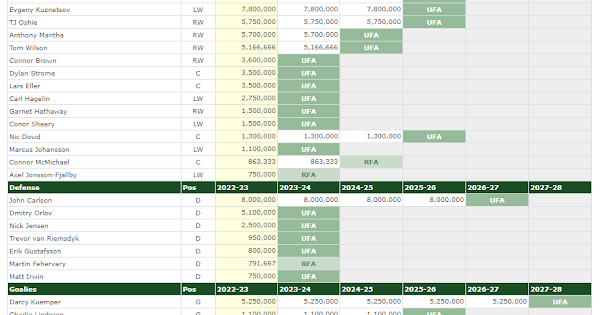 Here is a probable lineup to start the season:

If everyone leaves AND Backstrom cant return...these are the holes we have to fill:

Holy shirts n pants, thats a lot of gaps to fill! Here are some potential targets around the league that are gonna hit the market in 2023:

Man, I hope we can keep Orlov!

Everything comes back to Backstrom and his future. The Capitals constructed their roster to plan for both scenarios where he returns OR retires.

I expect this Caps team to be competitive this year (maybe #2 or #3 in the division) and then hit free agency hard next season. It is crazy to think that almost half of this roster may not be with the team next year. Sad. It is also within the realm of possibilities that the Capitals are SELLERS at the deadline and move some key assets before they hit free agency. If we happen to be out of playoff contention, I would be okay with acquiring draft capital for many of the pending UFAs that remain. Then hit FA hard next offseason.

What do you all think about the state of the roster and pending contracts? Good thing or bad thing? I would love to see and read your thoughts and comments! Thanks for reading and Go Caps!