Wanna blog? Start your own hockey blog with My HockeyBuzz. Register for free today!
The Penguins don’t have any cap space. They are 1.4M in the hole right now according to CapFriendly. They are allowed to exceed the salary cap by 10% so technically they can make signings. Any signings will likely be in the Danton Heinen range. There are always players hanging around at the end of the summer.

Today we are going to get on the nostalgia train. The team has signed Evgeni Malkin, Kris Letang, and Bryan Rust this summer. Sidney Crosby is still under contract for another three years. Phil Kessel? He is still a free agent. Should the entire band get back together? Should the question even be posed? It’s August 1st, literally any question is on the table this time of year.

You aren’t getting the same Phil from the glory years. That is for sure. He is going to be 35 in the fall. His skating looks like it has lost some of its burst and the snap shot isn’t firing on all cylinders. Can he still function. Here’s a look at the Phil Kessel the Penguins got when they were winning Stanley Cups. 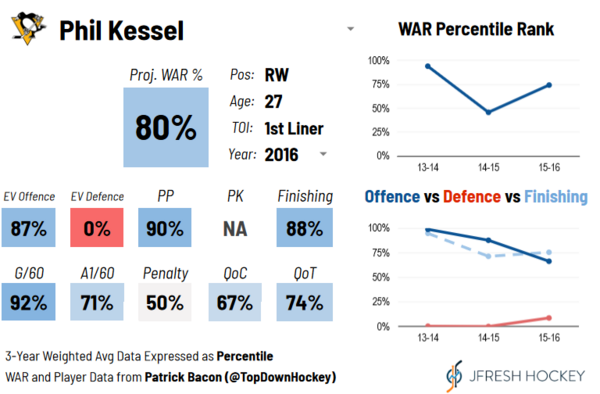 Pretty great offensive player. You aren’t going into things thinking you are getting any kind of defensive performance. It has never been a thing. Even when he was a tremendous player. His 5v5 offense and power play contributions were very good. His finishing was an x-factor.

Believe it or not we are almost to the point where Phil has been gone from the Penguins longer than he was a Penguin. So how does mid-thirties Phil look? 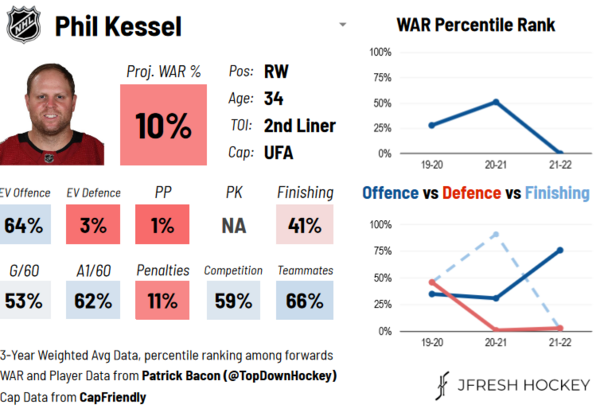 Look at this guy improving his defense so late into his career! Still not a contender for the Selke, though.

His strengths which made him a special player have taken a hit. His finishing isn’t where it was. He only scored eight goals last year. It was his lowest total since he scored 11 goals in 70 games. Goals were always a big part of Phil’s appeal. You could overlook the defensive stuff due to the goals. Those weren’t really there last year.

The most shocking thing, at least to me, is how the power play contributions have dried up in the Arizona desert. I find it hard to believe he lost his ability to pass the puck and facilitate structured offense. I also don’t watch many Arizona games so maybe he has. His contributions went from awesome to non-existent. Throw in the fact Bryan Rust has acclimated himself nicely on the power play since Phil’s departure and this isn’t necessarily a place of need for the Penguins anyways.

The other stuff is pretty average and in line with what you would want from a depth player. I’d rather get this version of Phil than running out Kasperi Kapanen or Brock McGinn out there with their salaries. That said, it is irrelevant to the real variable in question. His consecutive games streak.

There’s no getting around the fact Phil Kessel’s #1 priority will be on extending his consecutive games streak to become the NHL’s all-time ironman. He is 7 games shy of current record holder Keith Yandle. He has his championships. He’s on the back end of his career. This is the only carrot still dangling in front of him. I would not want anything to do with it. You can see how things played out with Keith Yandle and the Flyers and they weren’t even close to being contenders. The Penguins, whether they are or not, are still trying to be contenders. There’s no way Mike Sullivan is going to gift wrap a playing slot for someone. The idea of having to listen to the discourse surrounding whether or not Phil deserves a lineup spot or not is nauseating. Any of the good nostalgia feels would be canceled out by the consecutive game stuff. Because even if he passes Yandle, and he likely will, he isn’t going to want to stop. He isn’t going to pull a Cal Ripken and voluntarily step down. This is going to be a thing until he physically cannot step on the ice.

Phil Kessel was an awesome Penguin. His era was incredibly fun. This is one of those things where it is best to leave things be. Phil can chase those games somewhere else.