Wanna blog? Start your own hockey blog with My HockeyBuzz. Register for free today!
Prior to Thursday’s game against the Islander Mike Sullivan was 3-9-1 in his last 13 head to head matchups with Barry Trotz. It was sure looking like 3-10-1 was in the cards, but the Penguins stormed back from a 3-0 deficit to not only earn two important standings points, but stop the Islanders winning streak at ten. For now the Penguins 17 game winning streak record is still in tact.

Truth be told I wasn’t going to be overly critical of the Penguins even if they had lost the game. This is the third game in a row they dominated their opponent. They have been quite unlucky in the sense their process wasn’t lining up with the results at all. The Penguins underlying numbers haven’t been this consistently good in quite some time. Deployment and roster construction has gotten in the way for quite a while. Roster construction is still so so, but the deployment is way better. Players like Jack Johnson are finally not being elevated and this has helped immensely. It paved the way for the Pettersson-Schultz pairing to get some runway and start to grow. Being able to move the puck out of the zone and sustain an attack was something the team couldn’t take for granted the past few years. I see it happening more and more. 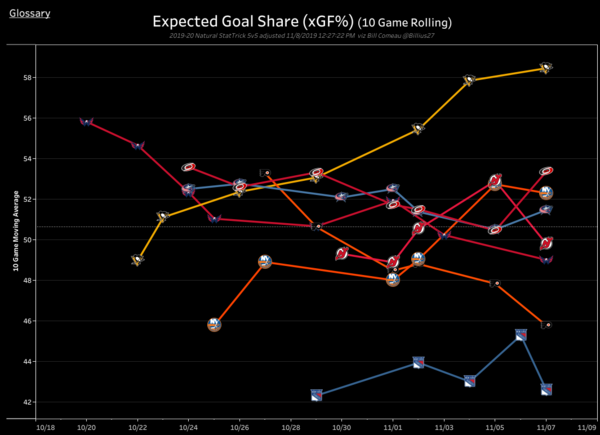 Here’s the shooting percentage one 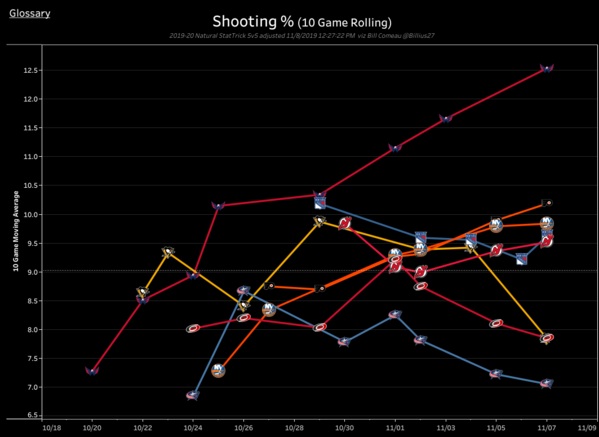 You can see why the process hasn’t matched the results lately. I think I’m going to dive deeper into the shooting percentage thing at some point.

One of the notable things to happen last night was Mike Sullivan changing up the forward lines and getting immediate results. I’m not against taking Dominik Simon off the top line. He’s not a bonafide top line or even top six player. He’s a placeholder much in the sense Conor Sheary was one. Somebody who can fill the spot and go along for the ride and not hurt things. This helps spread depth. It’s OK to shuffle things. I don’t know if Alex Galchenyuk is going to get traction on the Crosby line, but these are things you can try. Jared McCann and Bryan Rust had plenty of traction last night being with Evgeni Malkin. Rust scored twice including an impressive NHL 94 wraparound reenactment to win the game in overtime. McCann finished with a goal and two assists. Malkin finished with one and one. I would bet on seeing this line in the next game.

Yesterday the first GAR numbers of the year were released by Evolving Wild. I don’t usually reference them in my analysis because they don’t pass the smell test for me. I’m certainly not capable of creating my own GAR model, but that doesn’t mean I can’t raise some questions about the models that are out there. 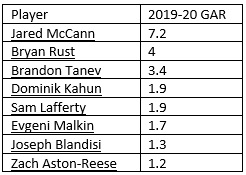 Notice Sidney Crosby is missing. These are all the forwards on the Penguins who have a higher GAR than Sidney freaking Crosby. I mean, Sam Lafferty? Joe Blandisi?! Woof. Anyways, this is one example of why you don’t see it in this blog.

'THE MIGHTY DUCKS' series is in development for #DisneyPlus. The series will focus on a 13-year-old boy who gets kicked off the Mighty Ducks until his mom decides to start their own team, find players, a coach, and a place to play. Production is eyed to begin Feb. in Vancouver pic.twitter.com/Lsti5cJc5f

Here’s a layup for the plot. Charlie Conway could be the court appointed coach stemming from an opioid arrest because the American healthcare system over prescribed him painkillers. This is a nod to the original movie and Bombay’s situation. The opposing coach will be Wolf Stansson who is coaching his grandson. Conway will look for guidance from Bombay who will be in the Hans role. It writes itself.