Wanna blog? Start your own hockey blog with My HockeyBuzz. Register for free today!
The Penguins keep rolling along and collecting wins. Brandon Tanev’s late third period goal opened the door for the team to get their first standings point by getting to overtime and then ultimately win the other point on Teddy Blueger’s top shelf shootout goal. They earned six out of a possible six points on the road trip all without Sidney Crosby who traveled with the team, but never joined them for a game. I really thought he would have played against Colorado. I should probably stop guessing although I’d be surprised if he isn’t back this week.

The Penguins are only four points out of first place and actually have a game in hand on the Capitals. I don’t have a unique opinion on this year’s Penguins. I agree with pretty much everything that has been said so far. It has been an absolutely amazing run of play considering their injury issues. There were legit questions that needed to be answered about this roster even without injuries. Throw in the fact Matt Murray hasn’t been good and goaltending hasn’t been an issue this year makes it even more unlikely. Who knew having a team of players who can actually skate would work?

Ray Shero was fired yesterday by the New Jersey Devils. Shero took over one of the worst situations in the league when he was hired prior to the 2015-16 season. Here is a look at the Devils roster when he took over according to Hockey-Reference 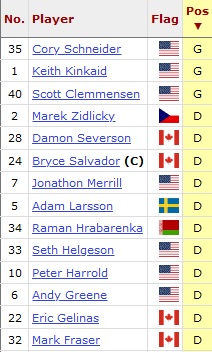 Lou Lamoriello left the Devils with an awful active roster and not much to work with as far as prospects went either. Not to mention the year before the Devils were forced to draft 30th overall because of the Ilya Kovalchuk contract shenanigans Lamoriello tried to pull. Point being this Devils job was as undesirable as it gets.

I thought Shero did more good than bad during his time in New Jersey. He certainly went back to his old bag of tricks with fleecing another GM in a trade for an impact player. The Taylor Hall trade remains one of the best trades of the cap era and one of the best punchlines… “The trade is one for one”

The problem with taking over a team like the Devils is that doing more good than bad isn’t good enough. It is really hard to build things back up from scratch and literally no room for error. The Devils are in a way better position right now than where they were before Shero’s tenure. While the Taylor Hall era wasn’t a massive success they did make the playoffs when they really shouldn’t have. They have Nico Hischier and Jack Hughes to build around. Although, part of the problem for Shero’s tenure was having those two players at the #1 overall spot instead of guys like Sidney Crosby, Connor McDavid, Alexander Ovechkin, Steven Stamkos, Auston Matthews, well you get the idea.

Shero really dropped the ball with his goaltending. He hung onto Cory Schneider when the team was going through a full rebuild. This is the time period you should go out of your way to trade away your good goaltender. This is especially true when that goaltender is in his thirties and won’t be good by the time your team is starting to be competitive again. Schneider is now in the AHL and no other significant moves were made to get the Devils goaltending up to a competitive standard.

Shero’s other big mistake was the same one he made in Pittsburgh. He held on to his head coach way past the expiration date. This seems to be a feature and not a bug with Shero. John Hynes was really bad this year and the Devils were expecting to compete for one of the last playoff spots. By the time Hynes was let go the team out of it.

Shero is an average general manager when compared to his peers. He didn’t even do a bad job in New Jersey. It just goes to show how difficult the job is when you are chasing the hard to get pieces.

Join the Discussion: » 289 Comments » Post New Comment
More from Ryan Wilson
» Evgeni Malkin led league in 5v5 points per 60. Do the Penguins know why?
» Penguins lose another player for year + Solving draft and playoff format
» Pittsburgh could be a hub city and win draft lottery
» Are the Penguins getting screwed? That's a hard NO
» Likely playoff format has the Penguins playing...