Wanna blog? Start your own hockey blog with My HockeyBuzz. Register for free today!
Well that was a nice surprise. The Tampa Bay Lightning looked as though they decided to have one last hurrah with the Stanley Cup the night before the season began. The Pittsburgh Penguins came out with a very deliberate gameplan and executed it exactly how they wanted. Their goaltending held up and they skated the defending champions out of the building.

Jon Cooper: “We could have played Pittsburgh’s farm team and it might have been the same result.” 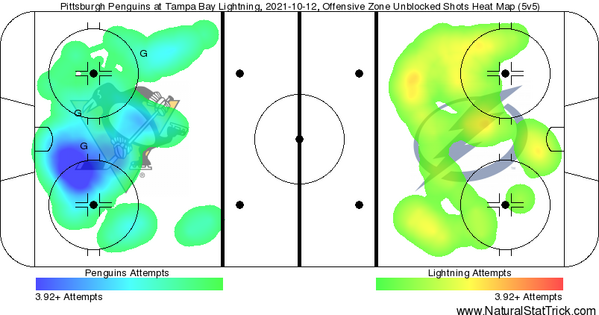 The Penguins game plan showed discipline in how they went about their forecheck. The pressured hard, but at the same time had their safety valve up high with F3. What this did was rush Tampa’s first breakout pass while still maintaining numbers up top. You could tell Tampa wanted to run and gun, but when an F3 is angling you to the wall it makes life incredibly easier on the defense to step up at the red line, thus not as many controlled entries and not at many threats for Tampa to showcase some of their scoring talent.

It was a night for new Penguins to score as both Danton Heinen and Brian Boyle picked up goals. I thought perhaps Brock McGinn would have added to the list when Pittsburgh was scoring like 100 empty net goals. There were actually three empty net goals and I respect what Tampa was going for. They were going to lose either way, but they did score twice with Andrei Vasilevsky on the bench. The Lightning weren’t generating anything at 5v5.

One prediction I feel confident in is that Danton Heinen won’t be pulling a Mark Jankowski. The former Penguins scored in his first Penguins game then looked like he was ten years into retirement each game after. Heinen has shown an offensive pulse in the past. I’m not sure what the ceiling is, but the floor won’t be Jankowski.

John Marino played with Marcus Pettersson because Mike Matheson was scratched from the lineup with a day to day injury. He had a CF% of 55.56 and an xGF% 62.70. They desperately need Marino to play more like his rookie year than last year. Kris Letang is at the risk of an aging curve and a functional John Marino will go a long way in helping the overall cause.

Everybody’s favorite top line winger started the season on the third line and played a good game. Dominik Simon made multiple plays throughout the night to create time and space for others whether it was in the neutral zone to spring a transitional attack or placing pucks for players to skate into. He had some high quality scoring chances and didn’t score, but he had a terrible long distance shot which did. For league minimum he’s a nice depth player to have.

ESPN kicked off their hockey coverage last night. It will be better than NBC because they will actually try to promote the sport, the league, and the individual players. It won’t be perfect, but I would be floored if it was as bad as NBC. Things like the sky cam have potential to show how time and space is created on the ice. The biggest issue was for some reason it looked like a tube TV with Vaseline spread all over the screen when they switched to those angles. If it was in HD things would be fine. It was great with no threat of Pierre McGuire showing up, but John Buccigross has potential to pick up the mantle for Regis. He has a dated view on the sport and is corny in the worst way. I was hoping, but knew they wouldn’t, leave both Buccigross and Barry Melrose in the past. Mark Messier and Chris Chelios might not be the direction I would go in, but it isn’t Mike Milbury.

Pittsburgh is likely to face a tougher challenge against the Panthers tomorrow night. They aren’t going to sneak up on anybody after their performance against the Lightning. Florida has a solid roster and if they don’t get tanked by their goaltending they should be among the better teams in the conference.