Wanna blog? Start your own hockey blog with My HockeyBuzz. Register for free today!
Not a lot going on at the moment. Thanks to those who submitted questions

The Penguins still seem to be in an all-in, win-now mentality. What is the one thing that they need in order to get to the Conference Finals and Cup Finals this season, and why is it good goaltending?

The first thing I want to say is that I don’t agree they are all-in and win-now. They are trying to play both sides of the fence and I think the end result is going to leave them as a team capable of making the playoffs barring roster catastrophes, but will need so many bounces to go their way to make their way through the conference in the playoffs. As you mentioned, goaltending is a must to even have a chance. If the Penguins were all-in they would have kept Jared McCann even if they don’t want to give him his next contract. They could have just let him walk as if he were a rental. The team did nothing creative or bold during this offseason to improve their team. It is likelier the team is worse than last year instead of better. Has Ron Hextall changed his spots? The early returns look similar to Philadelphia where fans grew tired of inaction and a lack of roster moves that will actually make a difference. I think they will certainly be competitive for a playoff spot, but not a contender as is.

Do you think there is a chance Hextall tries to make a move for a center before the start of the season? If Malkin and Crosby bring out causes the team to have a slow start it might be costly.

I believe he already did in Brian Boyle. I wouldn’t expect much else. Hextall was quoted in saying he expects both Crosby and Malkin back so he won’t be using the LTIR space for any significant acquisitions. It isn’t a Kucherov situation, nor should it be. The Penguins moved McCann and Tanev for cap space and used that cap space up on milquetoast options that aren’t going to really make the team any better.


Are there any remaining FAs that would be a good depth option for the Pens? Specifically wondering about James Neal

The team only has 121k in cap space left. I think the roster is what it is for the most part. James Neal had a few decent seasons after leaving the Penguins, but he is close to washed. I also think part of the reason the Penguins wanted to move on were non-hockey related items. 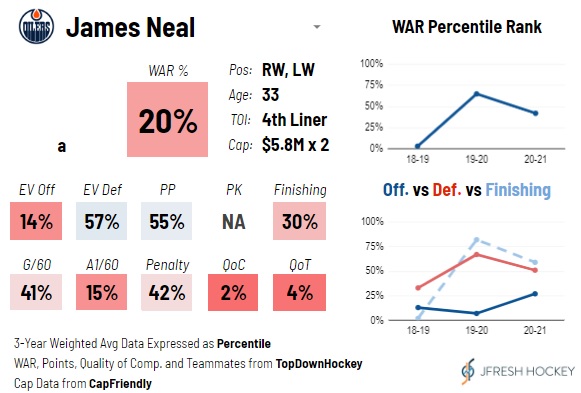 Over/under on a bunch of penguin related stats (wins, save %, Sid points, etc)

Predictions are tougher with Evgeni Malkin missing a chunk of time and Sidney Crosby missing at least the start of the season.

Over/under on wins is probably in that ~45 range. Their playoff hopes will lie in how many loser points they acquire. Sidney Crosby is 34 years old, but the last two shortened seasons he was still over a point per game. I’ll set his over/under at 75 points due to the uncertainty of when he will actually return to action. Save percentage I’ll just set at league average because that is what they need as a bare minimum. League average in all-situations last year was .908. What were the Penguins last year... .908

Potential of Hextall moving malkin? Maybe for middle of the road, younger center/picks?

I don’t think it is very high because I don’t think Mario Lemieux wants to see Malkin leave like Jaromir Jagr did. You would also be admitting this era is done and over with which is something I don’t think the Penguins are ready to do whether it is the right thing or not. The Penguins aren’t going to move him for middle of the road assets and I don’t think other teams are going to want to pay premium assets to acquire a 35 year old star player with a number of injury issues recently. I suppose the chance is greater than zero, but I would put it below 1%.